Are you writing something using React? Are you needing a custom Node/Express server-side piece to go with it? If so and you're not sure how to do it, this is for you. In this post I'm going use create-react-app to create a very basic React application, make it run alongside an express server for custom server-side logic, and deploy it to Heroku.

Here are my assumptions about you, dear reader: this post is meant to explain things to those who have a basic knowledge of React, Express, Node, Terminal, and Git. If you want to follow along, you will need accounts on both Github and Heroku. I also assume you have a text editor installed as well as create-react-app. I also assume for all terminal things that you are working on macOS.

This post is based on a simple but extremely useful Github repo by Mars Hall. He shows an example of how to do it. I'm going to walk through the process and attempt to explain why it works.

We are starting a new project, so we need a new Github repo. Go create a new repository, get the url for it, open terminal, and clone. To get that url, you're going to look for something like this when you have create the repo.

Now you just need to git clone [url] in the terminal to get started with this repo. Also, for the rest of this, all code changes will be in this repo. If you want to see what it will look like when we're all done, just take a look at Mars' repo. Mine would be 99% like it and I'm going going to make one small change.

In this step we will get all the basic pieces in place.

Okay, so we have cloned a basic repository. If the repo doesn't already contain a .gitignore file, you need to create one right now. I would recommend putting this stuff in it.

Next we want to use create-react-app to create our react app, so in the terminal run create-react-app react-ui. This will probably take a little while to run and will create a react app in a folder called react-ui. You can choose a different folder name but if you do, you'll need to modify things below. So be warned.

Next, we need a package.json file since we'll be running express, so run npm init in the terminal. At this point you don't need to tweak the settings, so you can just hit enter a bunch of times until the file is created.

If you do a git status at this point, you should see the following:

If you add them, you can then see all the files individually. You should see this. 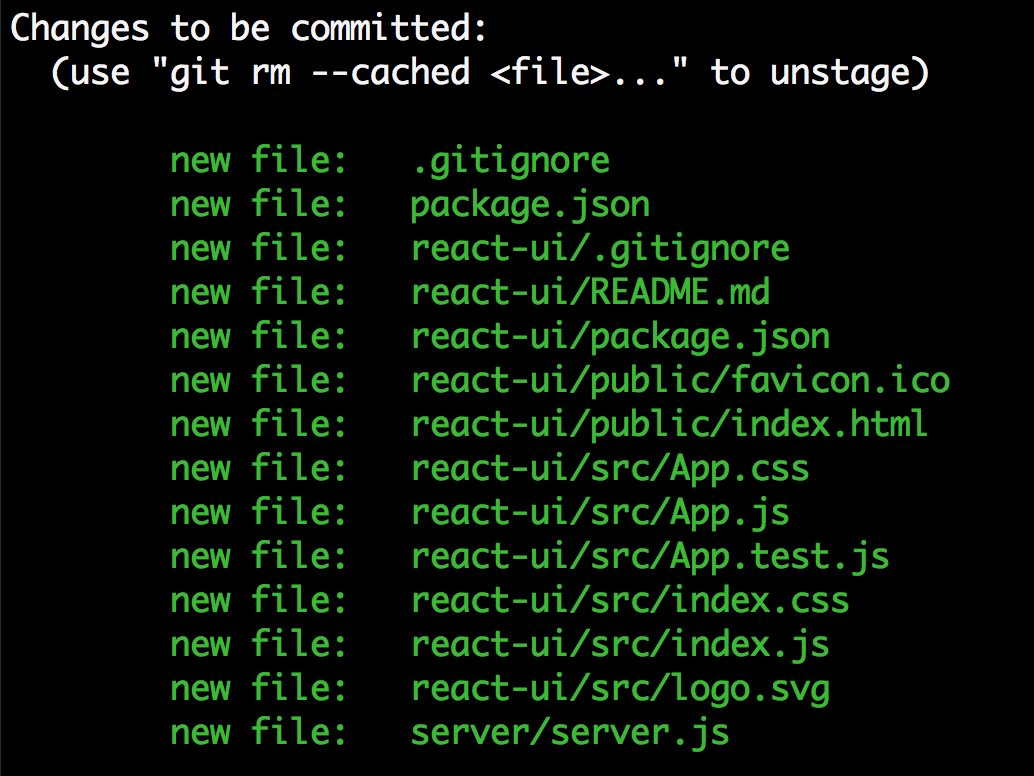 If you prefer the view from Atom, here you go.

Before moving on, make sure you have all that setup.

This server uses express, so we should install it. In the terminal, in the root of this application, run npm install express --save. This will install express and add it to your package.json.

Open the server.js file and put this code in there. We can use this exactly as it is. Now, let me explain.

Take a look at Mars' package.json original, lines 9 and 10. I am going to tweak the first a bit.

Replace what you have in your package.json with this. The first command is one that you'll run in development to start your express server. The second is one that will run on Heroku when your app is deployed. I'll explain this last one more in a bit.

Next, you'll need to setup your react app to proxy through to this server you just created. Open the package.json in the react-ui folder and add a line to have the react app proxy. The line looks like this: "proxy": "http://localhost:5000/" .

No more code changes to make this work! Make sure everything is committed and pushed up to Github. Time to deploy.

Create a new app on Heroku. You can name it or let it auto-generate a name for you. Doesn't matter. You want to go view the page for the app. It will look something like this:

Choose the Github option and find your repo.

Hit connect. After that is connected, hit "Enable Automatic Deploys" and then "Deploy Branch". After a few minutes it should be deployed. Also, any time you push your app to Github, it will automatically deploy.

What Is Going On? The Big Picture.

We are done! This works! But how?

In development, you'll need to run the server and the react app at the same time. This means you will need two terminal windows. In one you can run npm start from the react-ui folder. This will start create-react-app at http://localhost:3000 like normal. In the other you run npm start from the root, which will run express at http://localhost:5000.

In development, all the ajax calls from the React app will get proxied through the development server and you can do whatever server-side api calls you want to make to avoid CORS, whatever CSV parsing you want to do, or database queries you want to run.

When deployed to Heroku, heroku won't be running the create-react-app server like you do in development. Instead, it will run a npm run build command to make an optimized production build of your react app and will put it in the folder react-ui/build. This is why we created the npm script for heroku above and why static files are being served from react-ui/build. However Heroku is running your Express app, which is still going to make your api calls, csv parsing, or database queries happen.