I Have Some Old Paper Now - I Am SO Complutensian

I turned the corner. It was dark in the alley, but I knew what I needed it. It was an addiction. I had to see my dealer.

Moving through the crowded alley, I saw the man I needed.

He said, “Look. This is good stuff. You just don’t pick this stuff up anywhere. Most people sell it for about $600. This is a good price, especially for what you’re getting.”

Not able to withstand it any more, I pulled out my wallet, forked over the money, and walked away with my leaf of a Complutensian Polyglot.

Okay, so it wasn’t really anything like that, though the dealer’s name is Reed, it did cost that much, and I did get a leaf of the Complutensian Polyglot. Actually, I got quite a bit more. Hope you like lots of pics. If you’re on dialup, I pity the time it will take you to download the images. Actually, they may all be downloaded by the time you read the following paragraphs. You’ll see a lot here. But first, a little explanation.

The fame for being the first to publish a Greek New Testament goes to the rather well-known Desiderius Erasmus, a feat he accomplished in 1516. It was an accomplishment, despite its flaws. Much less well known is the first printed (1514-1517), but not published (not distributed), Greek New Testament, done under the guidance of Cardinal Jimenez de Cisneros of Alcala, Spain. The Latin name of the city was Complutum, and it in accordance with this name that the Complutensian Polyglot was named. The Complutensian Polyglot (hereafter CP) is actually quite a bit more than just another Greek New Testament. It was a significant work of scholarship that took a number of years to finish, spanning both the Old and New Testaments. In the New you get the Greek text and the Latin Vulgate side-by-side. In the Old you get the Hebrew (with notes about Hebrew roots in the margin), the Vulgate, and the Septuagint (the latter with interlinear Latin translation) side-by-side, with the text of the Targum Onkelos (an Aramaic commentary on the OT, essentially) at the bottom (only for the Penteteuch), which is also accompanied by notes on the roots of Aramaic words in the right margin. I hear that there are even other bells and whistles in other volumes. Anyway, getting back to the story, because they distributed their volumes after Erasmus, their work never achieved the prominence of Erasmus. This is particularly unfortunate because of the general belief that their work was far superior.

Quite a bit later, in 1966 to be exact, a volume of the CP was broken up into individual leaves, packaged very nicedly, and published for the members of the “Book Club of California.” Along with the leaf comes a very nice work called “The Great Polyglot Bibles,” describing the history of the CP and two other polyglots. 400 copies were published. This set is actually very excellent and classy. So here are the pics of not only the leaf, but of the set as a whole. 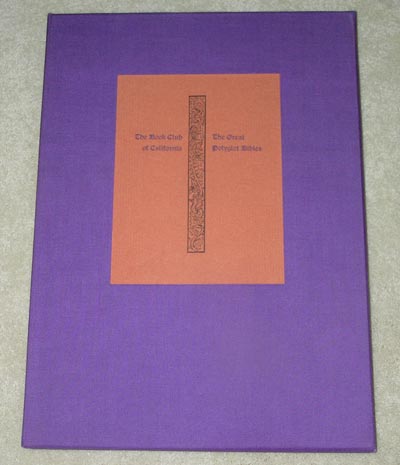 The leaf and book are kept in a box covered in purple cloth, just large enough to fit the folio book and leaf inside, whose dimensions are about 14” tall and 10” wide, so its pretty big as far as most books go these days.

Inside the box you see the materials, which enclosed in this cover, a rust-colored, thick, but flexible, protection for what’s inside. Inside the cover on the left is written, in pencil, the number 168. I’m taking that this is number 168 of the 400 published. 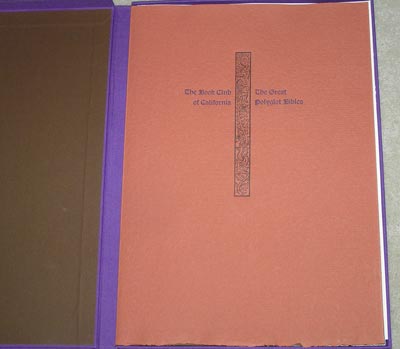 Inside that is a little note. Not significant, but I figured I’d put it up anyway. 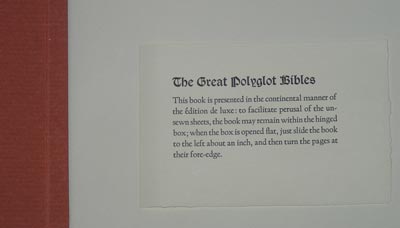 Afterwards are a number of blank pages, then one that states the title of the set. This is not pictured. Next is the part of the folio that actually contains the leaf. Here’s the cover of that: 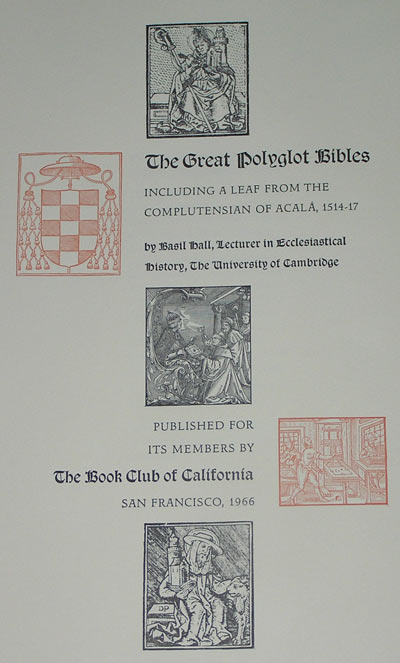 Next is another publishing note, talking about the type of paper, fonts used, the press used (an 1830 hand press…interesting…), etc. 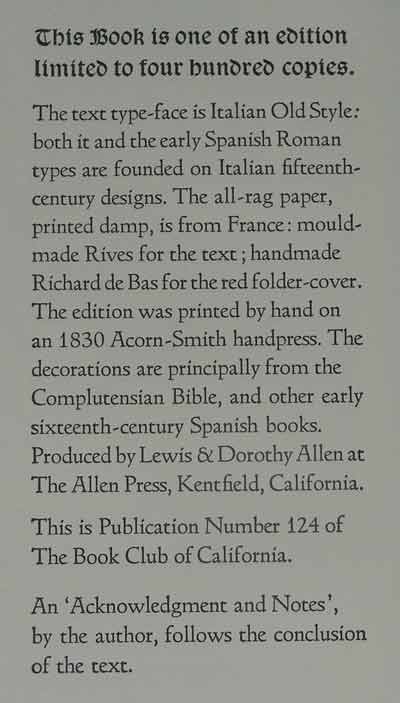 Next is a reproduction of the title page of the CP. 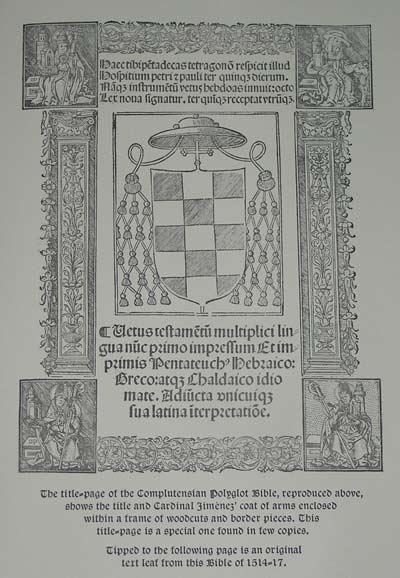 So. You want to see the actual leaf? Well, I guess so. Here is a pic of the first page, followed by the reverse side. 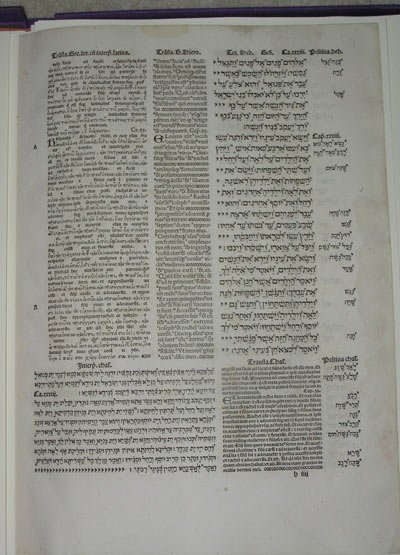 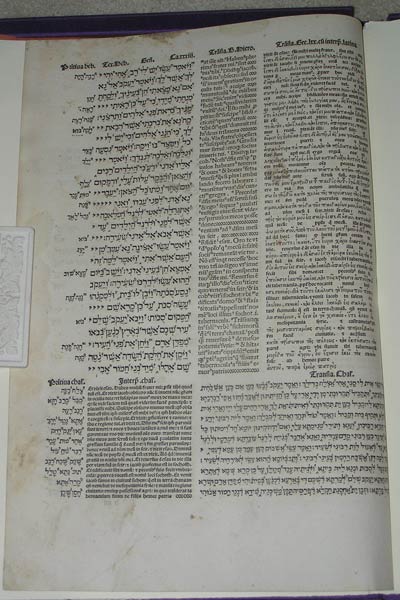 If you want to figure out what text this is from on your own, skip this paragraph. Do you…wait…wait…I guess not. This is from Genesis 32:31, about half way through, and following. The first page ends at 33:8. The other side picks up at the beginning of 33:9 and goes through almost the end of 33:19. Here are a few close up shots from the first page. Starting at the left (the inside), the Greek with interlinear Latin: 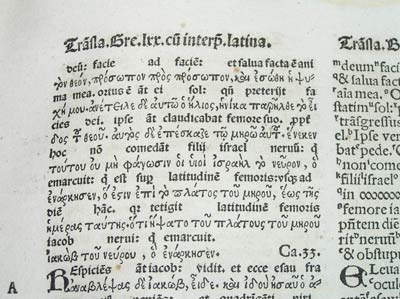 The Latin is above the Greek text, though don’t let that confuse you. I think the note above says something like “____ (don’t know the first word) Greek LXX (short for Septuagint) with interpretive Latin). My Latin is rusty, so please be nice :). The font is readable, though it is not as nice as the font used on leaves of the NT (Metzger’s “Text of the New Testament” has a picture, if you have it).

In the middle is the Latin Vulgate: 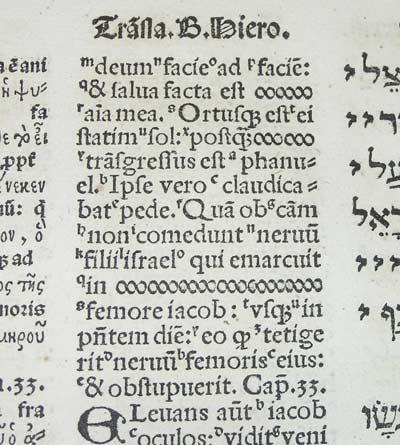 As you can see from the bigger pics, this is the most narrow column. The typeface is pretty readable.

On the outside of the leaf is the Hebrew: 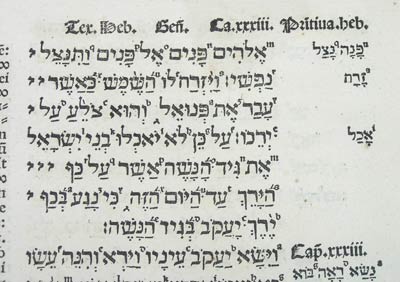 The winner for best typeface easily goes to the Hebrew. That is an excellent printing job. very readable. On the right are some notes on roots. For example, you can see that the root for “face” is listed on the right. The consonant spelling is correct, though the voweling is a little off.

Next comes the bottom of the page on the left, Targum Onkelos. 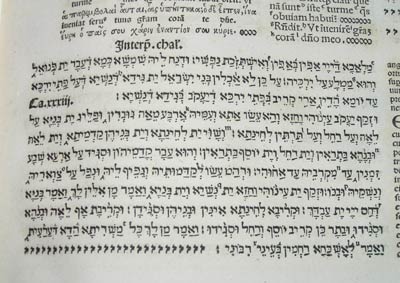 Note that it is labeled above “Interp. chal.”, so it is called “Chaldee” and not “Aramaic.”

To its right is a Latin translation of the Chaldee/Aramaic. 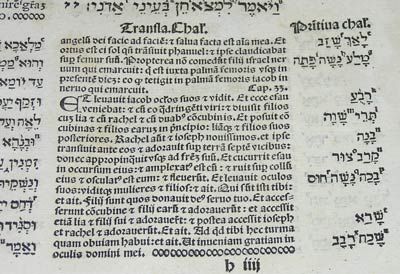 The title is “Tranfla.Chal.” Note that the “f” is really modern “s”, so we can see that this is the translation of the Aramaic portion. To the right are some notes on the roots of some of the Aramaic words.

Next is a reproduction of the colophon page. 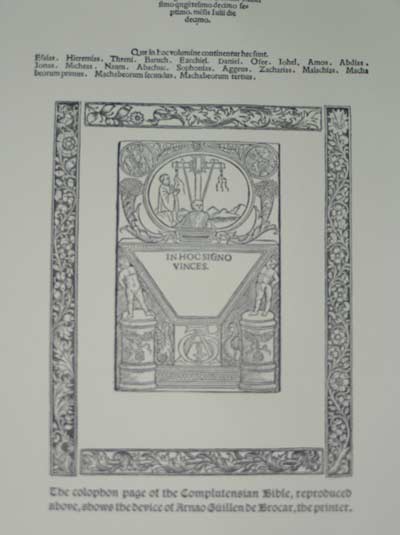 Next is the self-named treatise “The Great Polyglot Bibles.” 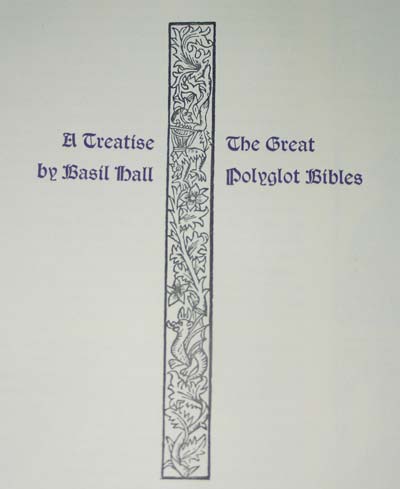 Next is the first page. Every page is lined with images like these, which I believe are from the CP. 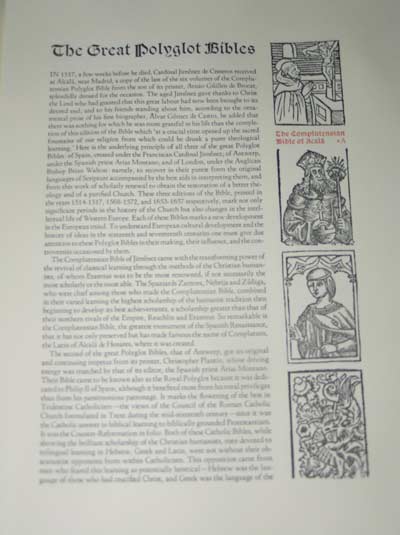 So, that’s basically it. Now, for you textual critics who handle this kindof stuff frequently, I’d like to take the leaf out. Right now it is glued in. Any way of dealing with that without damaging either the leaf or its containing folio? If it helps, here’s a few pics of the glued edge.

First from the front (leaf is on the bottom).

Second from the back. 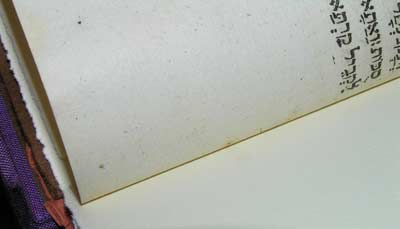 This, by the way, definitely falls in the category of “that would be cool,” rather than “that is necessary.” But, hey, it’s nice to do it occassionally. I can’t normally afford this kind of stuff, but I’ve been saving up Birthday money and got some Christmas money a little early.

If you want any higher resolution pics, let me know. I’ll email them.

this is smooth. Is this by any chance the prize for the high grade in the greek class?

now you are the coding complutensian.

I might be able to help with the Latin.
Trãnsla. is Translation.
interp.latina is interpretatio (a noun) latina (an adjective): Latin interpretation.

No Bill. I don’t have enough money to hand out this kind of thing every semester :)

Thanks Ken. Those I basically figured out, but I’m still missing a few. How about a shot at the first word of both the Greek and the Latin columns? Any idea there?

It seems to me that the first word of the Greek and Latin columns is Trãsla.=Translation.

Interesting comments on Trãsla. If so, then the Latin uses the equivalent of a nu-bar in Greek manuscripts. These, however, occur almost exclusively at the end of the line and at the end of a word. This would be a double exception to the rule. I haven’t worked in Latin MSS, but I wonder if some other reader of your blog, Eric, could illuminate us on this.

The following link has an introduction to abbreviations in Latin manuscripts: