John According to the Byzantine Tradition

Characteristics: (where 1 is bad, 3 is average, and 5 is superb)

Every time I drop by DTS I have to stop by the new books shelf in the library. They had one up today that I thought was an interesting volume, The Gospel According to John in the Byzantine Tradition. That link is to Eisenbrauns, who has it on sale for $11 cheaper than Amazon ($54 currently).

Following are two pictures, covering the first three pages of the text of John. 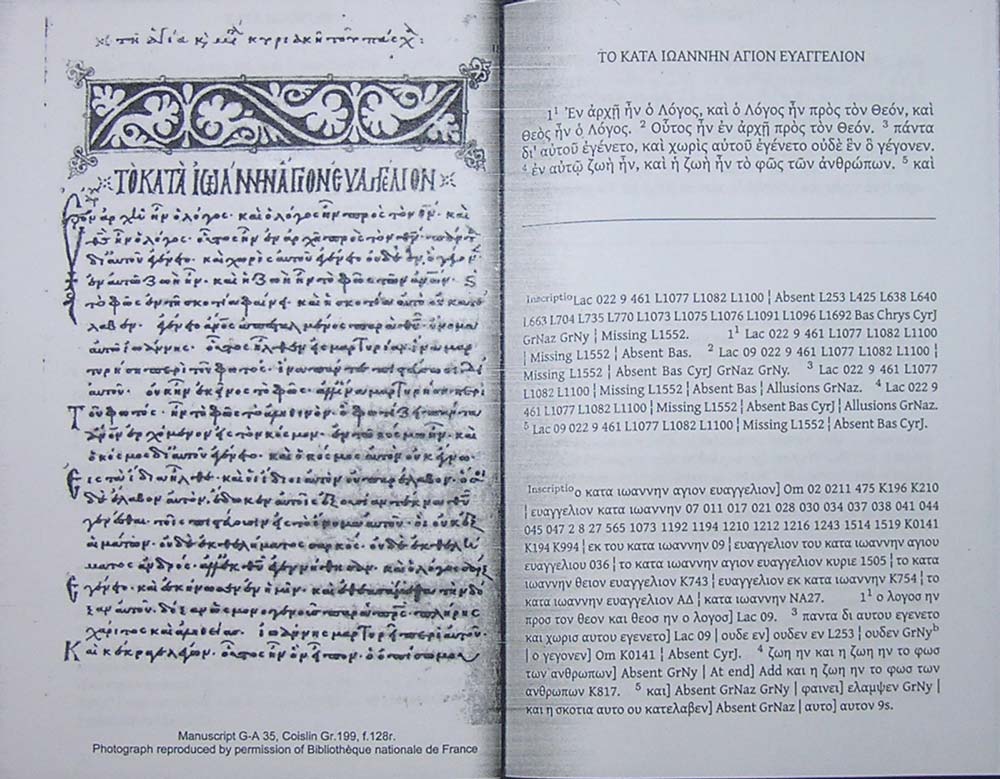 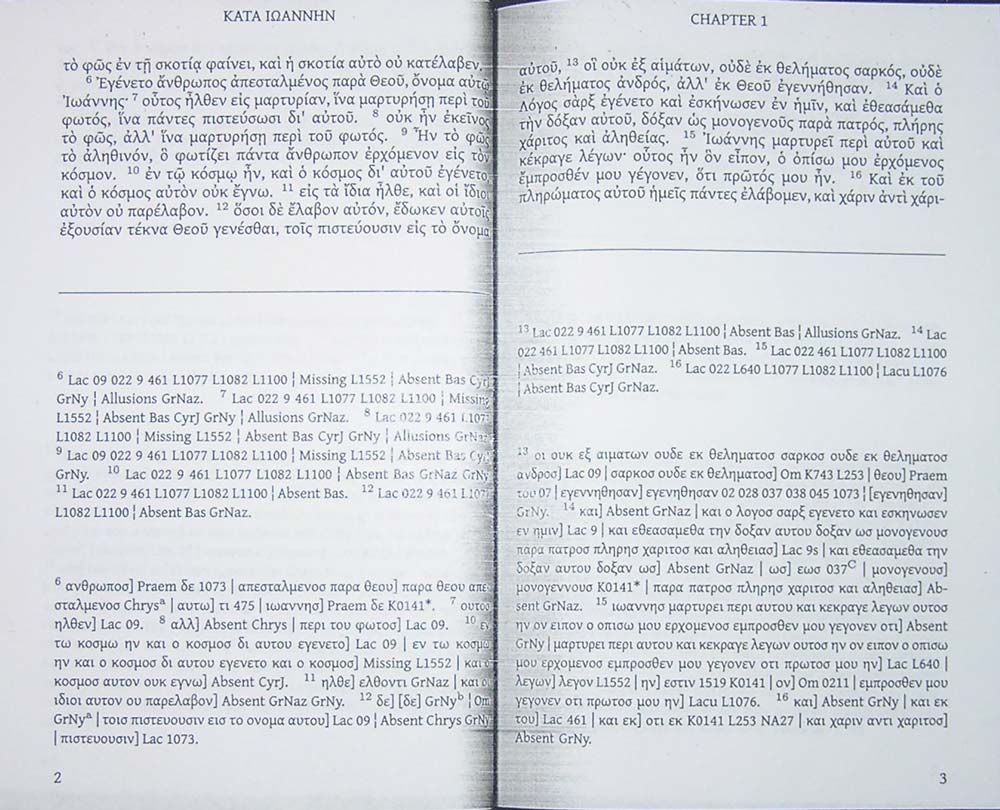 As the name of the book makes pretty clear, this volume covers the Gospel of John only. The goal of the editor (Roderic L. Mullen) was the following (pg iii, first page of the introduction):

The editor of this work sought to present a representative sample of witnesses to the broad historical richness of the Byzantine textual tradition across a long span of time, from the fourth to the fourteenth century.

And so there you have it. This volume is a diplomatic text, based on GA 35, an 11th century minuscule manuscript. The apparatus contains only Byzantine witnesses (and a couple modern printed editions). The oldest manuscript is the uncial codex Alexandrinus (5th century). In its apparatus it uses 18 uncials, 21 minuscules, 8 commentary manuscripts (manuscripts which include commentary...think of a modern study bible, except older -- one of which is actually an uncial manuscript with minuscule commentary, 0141), 18 lectionaries, and 5 patristic witnesses.

The evidence is not going to be exhaustive, but it is an impressive amount of data. Don’t expect every itacism to show up in the apparatus, but I would imagine most significant variation would be there. And no, I have not collated all the manuscripts to see how accurate and thorough they are (nor do I intend to as a mechanism for review of this volume), so I cannot comment on the quality of that part of the work.

The term "deficient" is not a quality statement but a statement of extent and extant-ness (extantocity, extantness, extanticity, extantishness?). In other words, the top section of the apparatus tells you which manuscripts could not be read (because the text was unreadable, or the material was torn off, etc.) in places where it is worth noting such. They have a very wide range of options for how they specify (seven total), which is pretty impressive.

The main apparatus uses different signs than the NA27 (like Add instead of + for additions), but does not seem to depart radically from what you will see in it.

The binding is similar to my old NA27, though it does not lay down flat as well. The text looks like it is slightly larger, and the same could be said about the apparatus. The font is also quite nice.

In terms of size, it is about 6 1/2 inches tall, so it’s a bit shorter than my NA27. It is about as thick as the NA27. The pages each have generally around 6-10 lines of Greek text, the rest of the page devoted to apparatus.

Who Would Want This?

If you are just learning Greek, feel free to buy it, but it is not a book you need. If you have no particular interest in textual criticism and are neither a Textus Receptus person nor a Majority Text person, this is not a volume you need to hurry up and buy.

Me? Yes, I will definitely be getting it. I don’t have money budgeted at the moment to get a copy, so it may have to wait till SBL (book sales, woohoo!) or until enough of you talk James into giving me a copy. Or maybe I’ll strike oil in my backyard. In the meantime, I’ll have to drop by the DTS library to get the data.

"though it does not lay down flat as well"

Everything in the book is also available online for free:

Note that 0141 is not included in the majuscule edition of John, but only in the Byzantine edition! This is because 0141 is a commentary MS, which has the Bible text in uncial, but the commentary in minuscule.

It did say in the introductory material that the data from the IGNTP project was used, but it also said that they spent time consulting photographs and microfilms. Was this only for the deficiency data or for the variants as well?

I'll make a note of 0141 above. That's a good point. Thanks for that extra bit of info.

From what I know, they checked all readings anew. Either from film or, when possible, from the originals.

The only material missing now for John is the non-Byzantine minuscules (in progress in Muenster).