You are getting this on day 2...but I was tired and decided not to stay up and post this. But regardless, here is day 1!

This trip begins with a trek to the DFW International Airport. Finding the check-in spot was straightforward though the check-in not. The luggage for my flight-mate, Adam, was checked only to Paris, not all the way to Athens. So we tracked him down (and I got to meet him face-to-face for the first time), sorted it all out, then took the short flight to Houston.

The next flight was much longer; it is over 9 hours from Houston to Paris. The plane was roomy enough and the flight did not feel like it was over nine hours long. I must give Continental props on the dinner. The beef, carrots and mashed potatoes where genuinely good. The breakfast was small, but that was cool. Overall the experience was excellent. 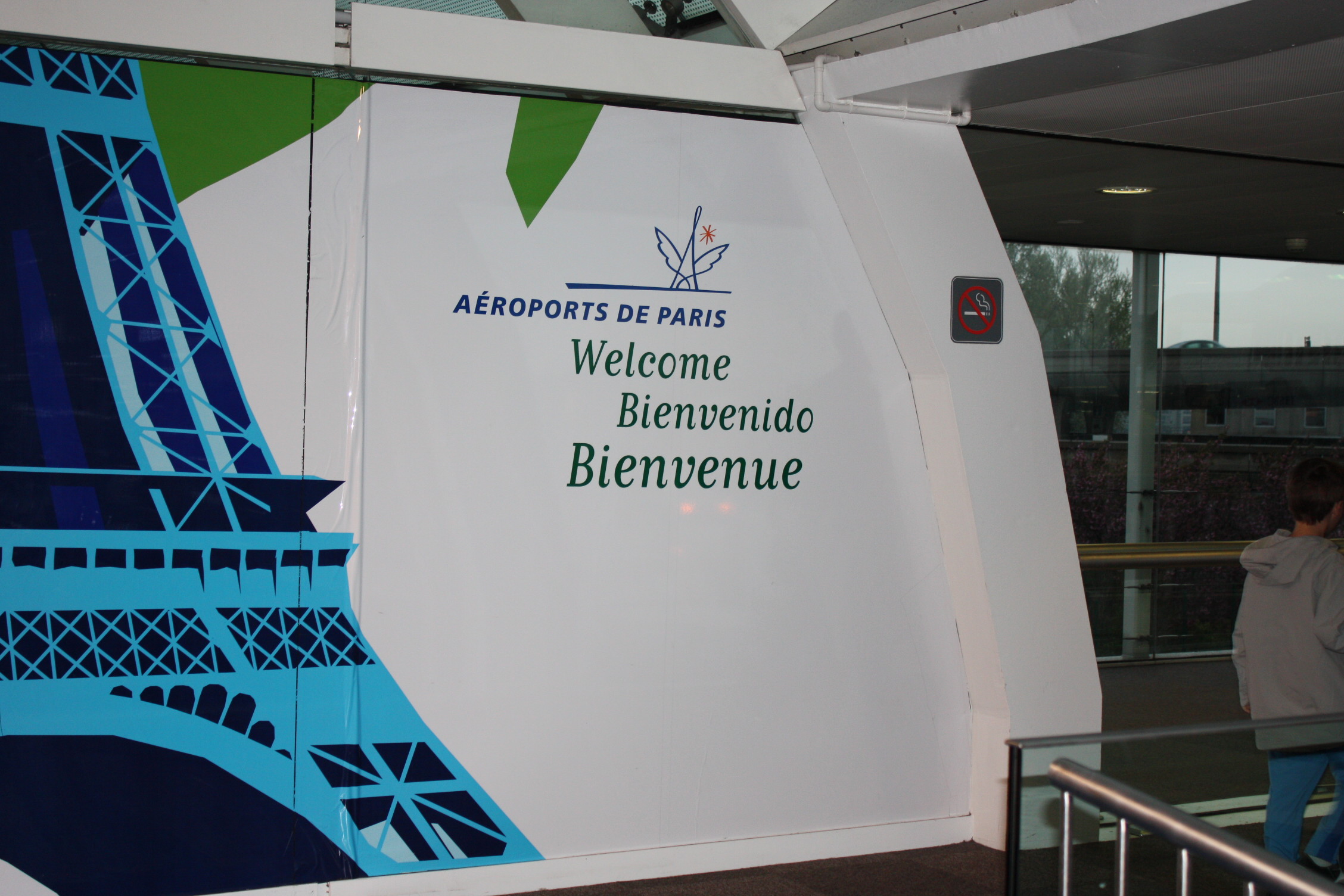 Je deteste the Paris de Gaulle airport. It took me about 30 minutes to get to that point, but then the opinion was irreversible. Everyone was rude and the place’s layout was confusing. After making my way through the maze and then being told that I had to leave the inside of the airport and go back in, and go through the check-in process again...not cool. And then we got to our gate about 2 hours early, went through security to wait at the gate. Guess what they didn’t have in that area? Restrooms. No restrooms past the bag-check. But they did have Playstations. FAIL.

We left on Olympic airlines. I was told it was a low-budget carrier but the plane was the most spacious of all of them and the experience very good. 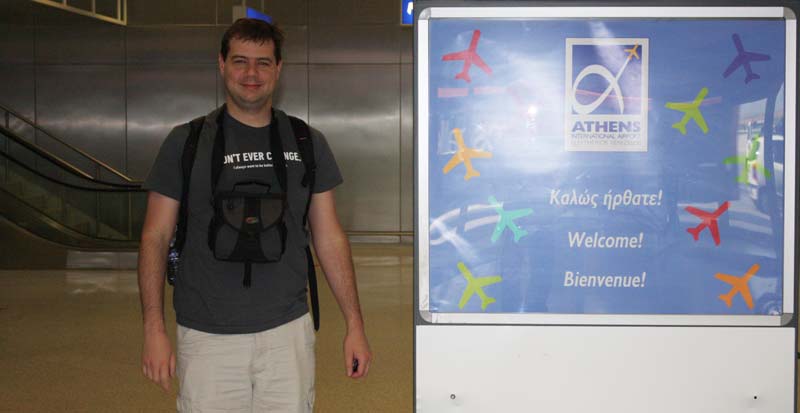 Adam and I arrived in Athens after an almost four hour flight. The airport we landed in was kinda small but was nice. We had to wait a couple hours for the third to arrive. Dan was not able to get tickets on our flight so he was routed through Germany. We found a nice cafe, had something to drink, and sat and read.

We only sat at the cafe for about an hour and a half, but were pestered by four people who tried to sell us things. One was a lighter, somebody tried to sell us some books. The third was someone trying to sell pictures and the last was selling lottery tickets (I found out later as it wasn’t obvious what they were trying to sell to this silly American tourist). We asked the others about this later and apparently it is legal for Greeks to approach you like this no matter where you are. In a four-star restaurant because you want a nice time? Well, you might have someone walk up to you to sell you a lighter. Sorry. That’s the way it works here. 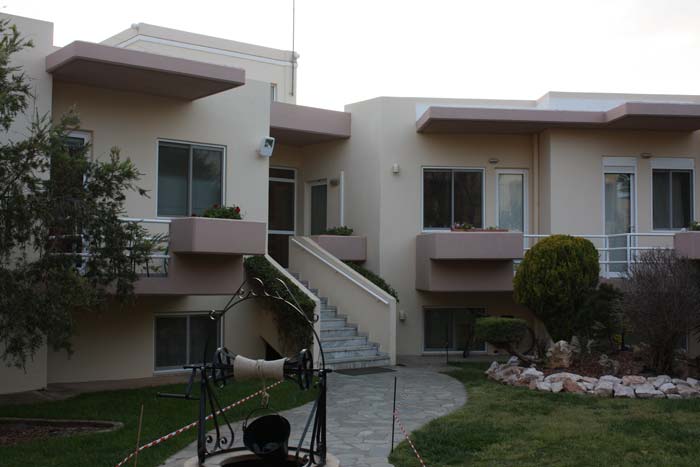 We were picked up by a very nice British chap who took us to our current place of lodging (though I expect that to last only a few days). I would tell you where but I was told not to do so...so too bad. I will, however, show you a couple pics. 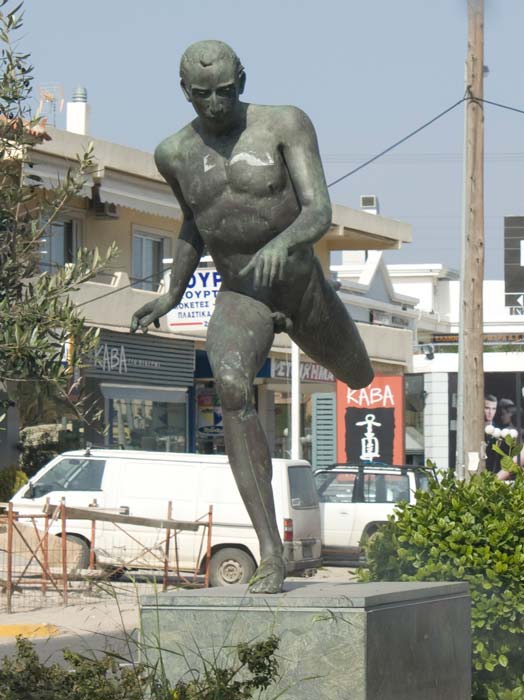 The town we are staying at is πικέρμι (Pikermi: see Wikipedia article on Pikermi here). It is apparently a suburb of Athens. It has at least one claim to fame, and that is being the mid-point of the run from Marathon to Athens so long ago. There is a statue to commemorate this on the main road in πικέρμι, which you see on the right. This contributes to a saying that should surely be considered a truism: A day without seeing the statue of a naked man is clearly not a day in Greece.

The night ended with our first Greek food, and they were nice enough to splurge on this first night. We ate at a small restaurant (~6 tables) in Ραφήνα (Rafina: See Wikipedia article on Rafina here) and got a plate of pork, chicken and lamb cooked in around seven different ways. Very tasty. Unfortunately I did not bring my camera as the place was right next to the water and the sight was quite pretty. Next time.

Afterward was a trip to the pub where I had some nice Ouzo. How can you not drink Ouzo when you’re in Greece? After chatting for a while with the team we headed back to snooze. It was around midnight and we all needed sleep after the flights.

No real work on day 1. Tomorrow it begins.