Thankfully, day 2 began late, giving us plenty of rest after the first day of travel. Normally the day will begin around 8, but today began at 10, at least for me. The others got up earlier but nobody woke me, so I was awakened by Dan at 10 who said it was time to leave. This wake up was a mixed blessing: Bad because a) I had apparently not finished sleeping and b) I was dreaming about eating delicious BBQ. It was nice, though, because I was eating BBQ in only my pajama bottoms at a relative’s house on Sunday morning at 9:45 when I realized that I was late to the Sunday School class (which starts about that time). And I was teaching that day. Fortunately, Dan woke me up right after this revelation. It saved me a measure of stress.

After cleaning up quickly, the four of us headed off to Athens. It wasn’t a long drive and the roads were mostly empty.

The first thing we did was have breakfast. I had a tasty crepe, coffee, and some fantastic orange juice. I’m sure you are fascinated by this part of the story.

Our next stop was a local institution that I am not at the leisure to identify at the moment, but here is a clue: they have Greek New Testament manuscripts and they are located in Athens. There you go. I’ve just narrowed it down to a lot. We were able to spend time with twelve New Testament manuscripts. They were all minuscule lectionaries or minuscule manuscripts of the gospels, all later than 10th century. This was a lot of fun but was just discovery and prep work for a later visit where a team would actually photograph (hopefully) all of these manuscripts and the others that the institution owned.

Just in case you are wondering what the prep work looks like, it basically involves finding out the following bits of data:

A few interesting notes to whet your appetite? Found one that had as a part of the binding (back of the manuscript) a leaf from a different manuscript. It wasn’t biblical but was definitely Christian. We found one whose first few pages were in paper and the rest were parchment. Anyway, some interesting things. We only have about an hour to look, so we were not able to get into them as much as we liked. But contact was made and further arrangement was made. I think we’ll be going back there tomorrow to pick up something.

And now for your modern Greek lesson for the day. Know how to make a "b" sound as in "boy"? If you said β you are wrong, as that makes a "v" sound in modern Greek. Here is a hint from a bookstore (that will show up later): 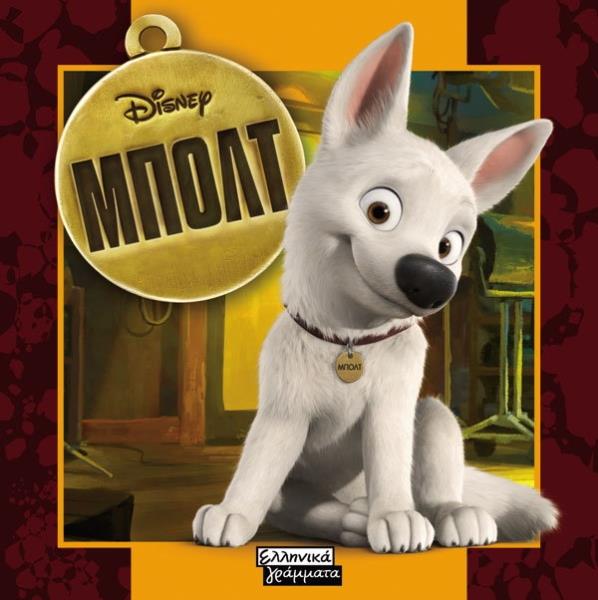 That is the Greek equivalent of "Bolt", so the "b" sound is made by combining mu and pi. This, of course, is timely, because it is time to talk about our next stop. 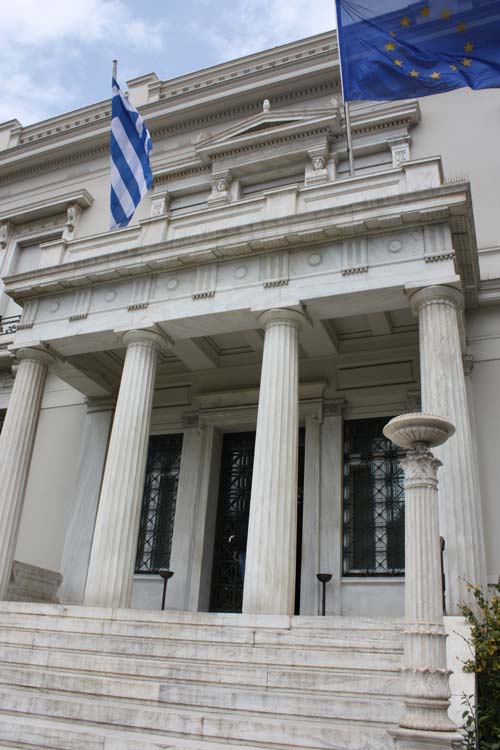 Next we went to a place I can name, the Μουσειο Μπενακη (Benaki Museum - this is its website and its entrance is pictured on the right). CSNTM spent a couple weeks shooting there recently and we came back to deal with the paperwork around what can be done with the images. I met two people there and spent the most time with one lady (though that was brief) who was incredibly nice, Dr Pitsa (pronounced "pizza"). That is a completely awesome name. The place was nice, though we only spend enough time there to deal with the paperwork. I’m hoping we can go back there tomorrow to look at the non-manuscript contents of the museum. You can find out more on this work here at the CSNTM website.

On completely random note, parking in Athens is a nightmare.

After that visit Dan needed to go talk to our mobile phone provider about why we inexplicably lost all phone credits on one of the phones. Since that was rather dull for some of us, they were nice enough to point out there was a bookstore across the street. Adam and I went to check it out. It was small but nice. But since my modern Greek is kinda rusty it was a little difficult to find things that I would like. At some point I think I will buy some children’s books. Should be good learning material.

Back to base around 4:30 for some R&R for a few hours. About 5:30 the roomy (Garrett) and I walked to the local market and picked up some really tasty cherry drink that Coca-Cola bottles here and some pistachios. Pistachios are produced here in Greece so are cheaper than in the states, and I don’t have to worry about the salmonella situation that is going on in the US.

We had a late dinner that consisted of a gyro. This was, of course, followed by another ouzo. Now I’m sitting back in my room, typing this. I think that’s all for day 2. See you with day 3!

What an exciting life you live! All I get to do is eat crawfish with your dad and mom tonight! Let me know if you get this - I’ll keep ‘commenting’ to ya!

Some of us have known you had nothing on your mind for a long time.

Ouch! But don’t worry. I think you’re a great guy. I won’t block your ip address :)

I would love to have some crawfish right now. Some of the food over here is good, but I miss American food already...especially steak.

Eric: Perhaps I should paraphrase Glinda:

Leave some chocolate pastries for the rest of Greece, BTW.

I hope I’m a good programmer, but that question is always best left to be answered by one’s peers.