Most of my verification time was spent on the very late manuscript of Matthew that we had photographed on day 1. The manuscript includes commentary. Some of it (perhaps all...I did very little reading of the actual text today) was in the margins, which ended up causing problems. Since its original creation it had been rebound, and some of the text that was in the margin was now in the binding itself (not too uncommon), making the text of some commentary impossible to read without disassembling the volume, which we did not do. So along with verifying the clarity of the images, I also had to mark down images that were missing commentary due to this later rebinding. Not terribly exciting work though important.

After the manuscript of Revelation, Dan and Garrett began on an 11th century copy of the gospels. This has turned out to be our most difficult to photograph so far as the text is older and the pages are very warped. Over half the manuscript was finished today and the rest will be completed tomorrow. I expect to spend my time converting images from raw to tiff to jpeg, verifying images and burning dvd’s.

One of my favorite hobbies is to explore bookstores. Today I was in my favorite bookstore, in terms of coolness of layout, by far. This was a pretty large bookstore compared to the other two I had been in since I arrived in Greece. Both of the others were small and contained two floors. This one was a little larger on each floor except that, if you count the Mezzanine, it had 10 floors. Seriously. It totally rocked. The nice Greek booksellers were nice enough to let me snap a picture of one of their level maps (though I think they were very confused by the request): 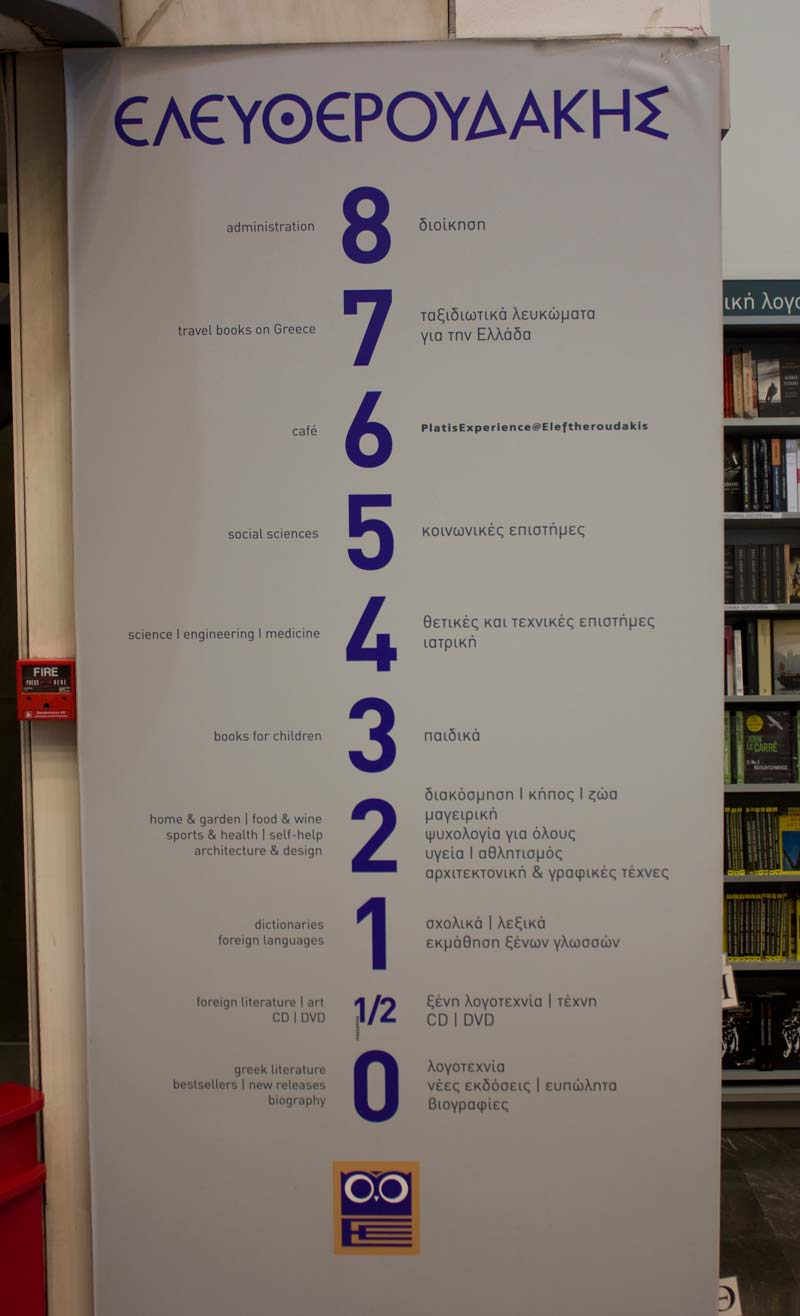 There was one book in particular that was interesting. It was 85 euro and weighed probably 20 pounds so it would have been a pain to get back to the states, but it looks awesome. It is a book, in Greek, that is a history of ancient Greek literature from Homer to around the time of Constantine. I wanted it so BADLY! I’m planning on going back tomorrow to get the ISBN number so I can keep a record of what it is. For now I think I’m going to wait to buy it since my modern Greek is rather lacking. I think the deal I’m going to make with myself is that by the next time I come (September time frame -- on vacation with the wife), I will need to have gone through a basic modern Greek course and must have read a number of the children’s books I have purchased. By then I will be far from a fluent speaker or reader, but I would expect that I could actually read it slowly, dictionary in hand. I SO want that book...

I believe I’m mentioned before that Google search is convinced that I’m Greek. I haven’t figured out how to get them to show their search interface and results in English. I noticed another site today that also thinks I’m Greek, and that’s Facebook.

Facebook, I can help translate your interface into Koine Greek, but you better not enlist my help for modern.

If you’re Greek book is the one I think it is, its been translated and expanded (!) into English:

Save your pennies. Its like buying Lampe all over again.

That’s on my wish list too, but I don’t think that’s it. I think the book I saw today had the word αρχαια in it, and this book did not in its original. But I will find out for sure tomorrow.

Hi Eric, thanks for your exciting reports. This seems to be day 12.

You’re right! Fixed. Thanks for dropping by.

Well, it was a guess. I see you’ve found the real thing though.