A Plants vs Zombies Halloween

Last week at work (Match.com) we had a Halloween costume competition with both individual and group contests. This year I stayed out of the individual contest but joined in with the mobile team to win the group prize. And win we did!

This year we decided to compete with not only our costumes but with a performance. And since this year marked the release of Plants vs Zombies 2, we decided to dress and up reinact a short bit of the game. Nineteen total people were involved including six plants (three sunflowers, two peashooters, one snow pea), eight zombies (four regular, one cowboy, two codehead and one pole vaulter), one to do video production, one for audio during the event, one stage hand, one player and one Crazy Dave. It was quite an event. Here’s a video of the performance. You might want to skip to about 45 seconds in.

We were very pleased with how it went. Apparently the judges were as well. My role was to make Zombie heads and be the player who placed the plants, so that’s me who runs around, plants the plants and almost slips and bites it once. 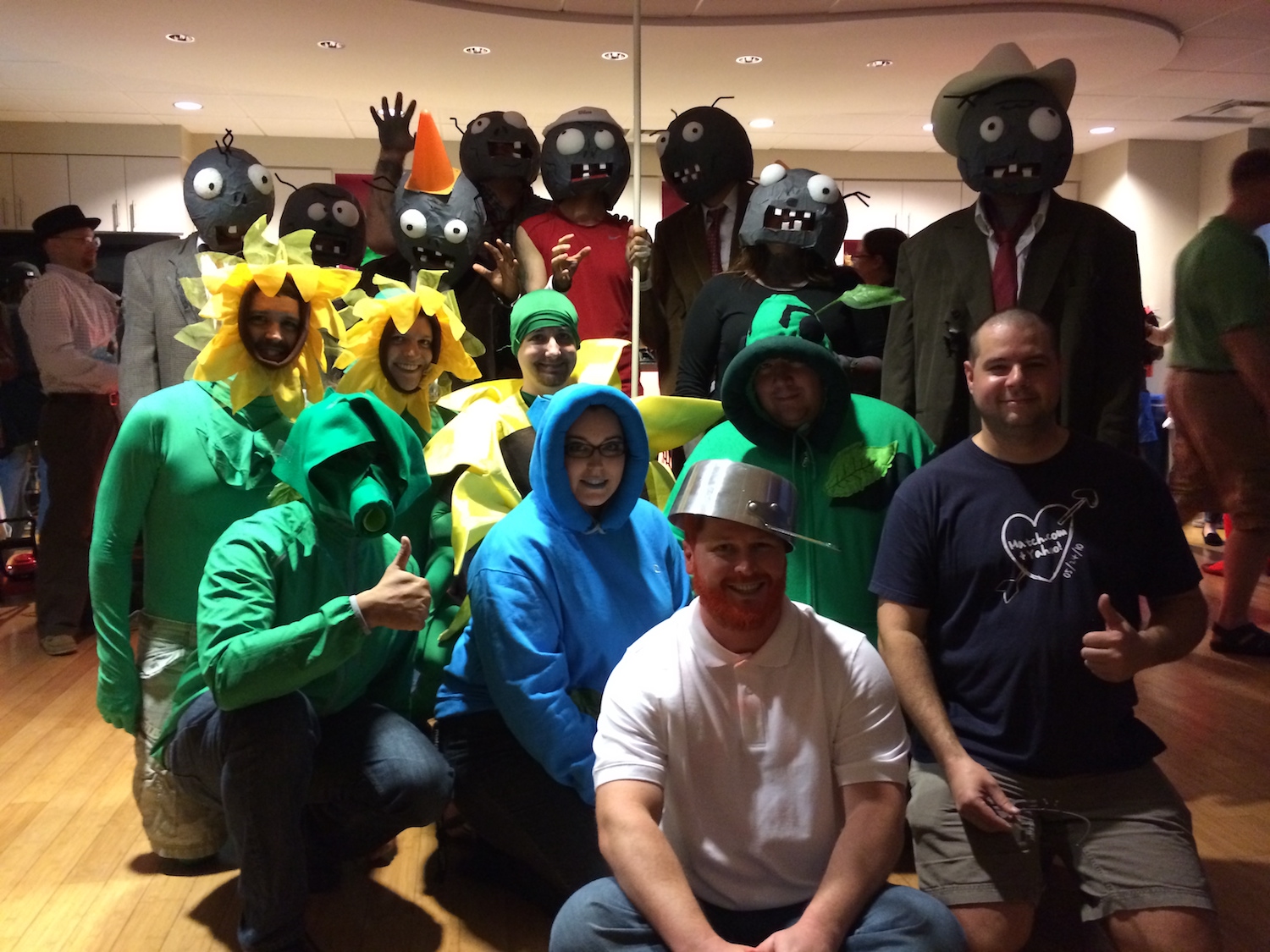 Team, you guys are the best. Let’s do this again next year!

How To Make a Plants vs Zombies Style Zombie Head

Just in case anyone wants to know how to create these zombie heads, here is how I did it. I was making this up as I went along so fortunately it worked. Here’s what they ended up looking like in the end.

Or if you prefer an action shot... 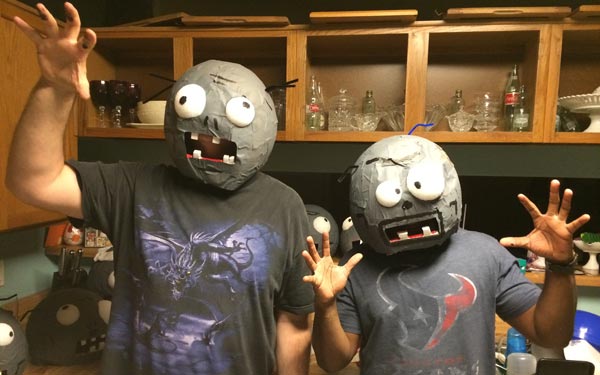 That is David and Deen, who both came over to my house to help me make the heads. Thanks for the help!

Here are the steps. Step one, blow up a bunch of baloons and paper mache them. Here is my zombie hatchery. Thoughts of Aliens were running through my head after this. 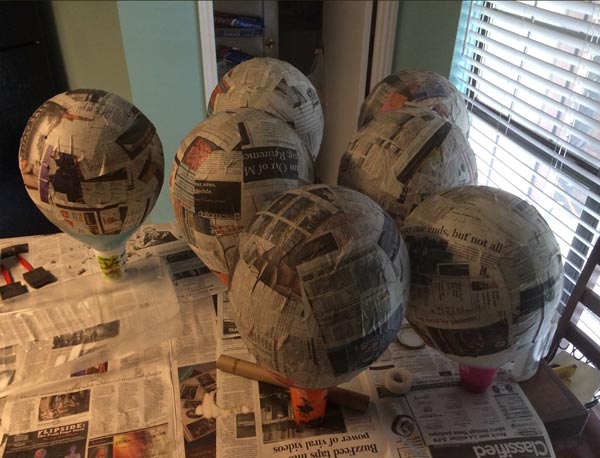 For the glue, I used Elmer's glue and mixed in a little water. Other than that it was just strips of newspaper. The first one probably had three to four coats of newspaper, this batch of seven had usually two to three. The difference was noticeable (the first one was much more stiff) but two was sufficient. The first one I did was very messy and difficult because I hadn’t thought to create a stand for the balloon to use while applying the newspaper. Later I thought to put some coins (for weight) in a cup and taped the balloon to it. That worked out great. After applying the paper mache, you need to wait a very long time till it drys. Otherwise I assume you would get a disaster. I waited about fourteen hours.

Step two, pop the balloon. The process didn’t damage any of the newspaper. Yay! You are left with a hollow form you can turn into a head. 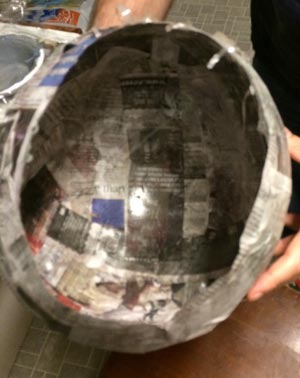 Step three, figure out where you are going to want to cut things. In all but one we drew the nose instead of cutting it, so we just needed three holes. We cut the holes for the eyes slightly smaller than the actual eyes (see below). 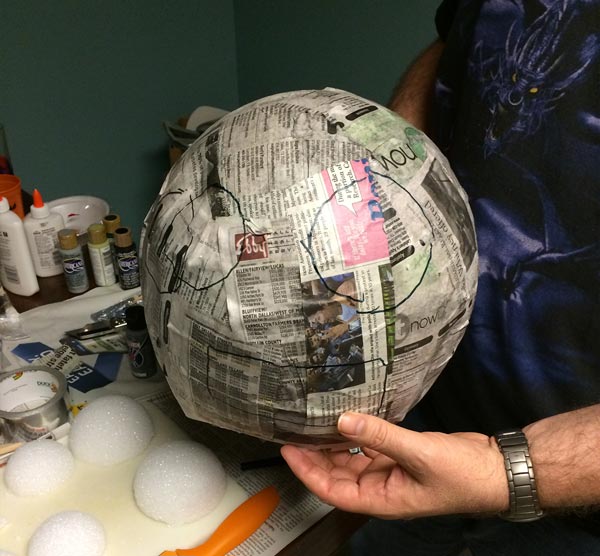 Step four, cut out the holes and paint it. We used dark gray Acrylic paint. It covered the pictures and type on the newspaper in one coat and washes off hands easily. 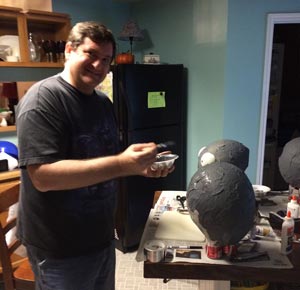 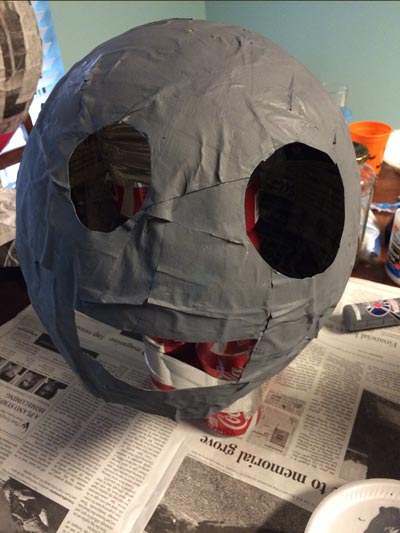 In step five we created eyeballs. We bought 2 inch and 4 inch styrophoam balls which we cut in half. We then taped them to the inside fo the head with the bulbous half of the styrophoam ball pointing out. For some of them we used two different sized foam balls to give us that further misshapen look. 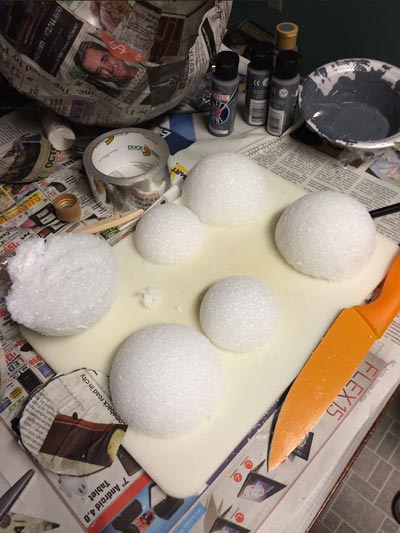 Step sixgets us teeth. We used styrophoam and cut it out in the shapes we wanted. 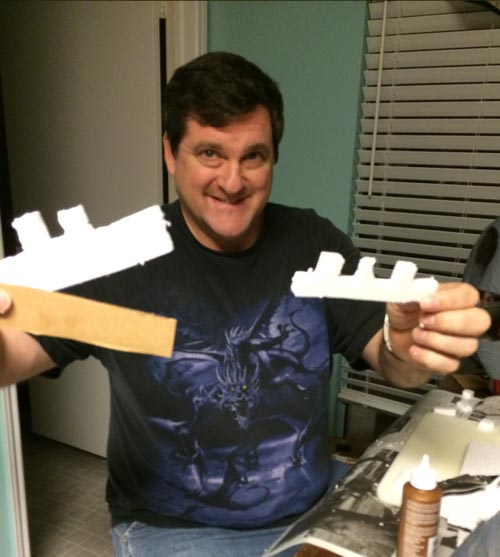 We attached the teeth using Aleene’s Turbo Tacky Glue. That worked great for us. For a little extra sturdiness we also glued some cardboard to it. 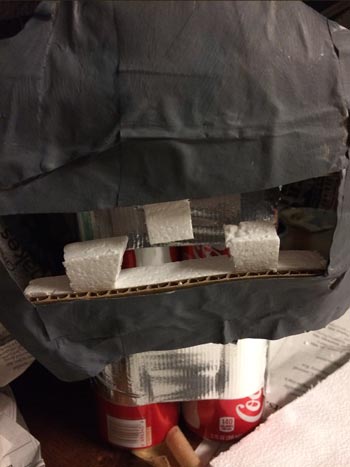 Step seven was final painting. We added pupils for the eyes and some contour lines for the face. We used black acrylic paint. For the gums we used red acrylic paint.

Step eight involved adding some hair. We used some short black pipe cleaners which we stuck through the head and taped on the inside. For reference, here is what the inside of the head looked like. 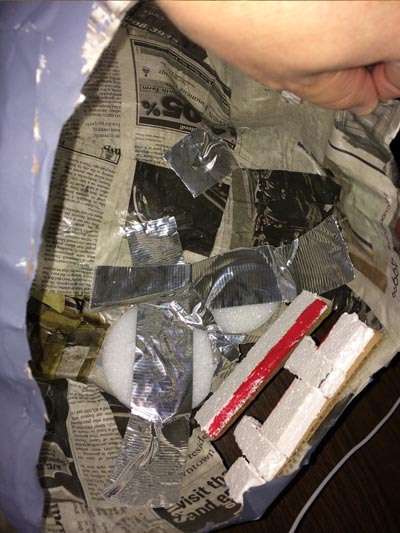 And we were done! They were a little hard to see out of but people could at least look down through the open mouth hole to see their feet and not trip. Cutting out the nose makes it a little easier to see as well.

And so that is how I made my zombie heads. It was fun. I haven’t done paper mache since I was a kid.