﻿Recent Activities in Educating My Children

Here in the Sowell household, we homeschool our children. This means that less of their education is delegated to others, putting more of a burden on us to get it right. (That comes with no inherent judgment against other choices as the rightness of this choice is situational, but that’s a discussion for another time). Kathryn (the wife) stays at home and has the responsibility of teaching our kids some of the very crucial stuff, like Math, English, History and so on and does the bulk of the teaching work. Today I want to discuss a few things I’ve been doing just in case others will find it helpful.

The wife and I have been discussing for quite some time how we were going to fit various things into our kid’s education. Today, we’ll discuss two of these things. The first question involved what we were going to do about foreign languages. Starting in High School and into college, Kathryn spent a number of years learning German. In High School I studied French and a little Greek. My Greek learning continued through High School, College, Seminary and even now. I even have a little experience teaching it. Along the way I spent a smidgin of time learning German, took some Hebrew Courses and one course in Aramaic. I’m also currently learning Latin. So there are a number of things we could have chosen just based on our experiences. And of course there is the option of learning another language that none of us have any experience with. Lots of homeschoolers recommend learning Latin, often because it will help with English (word roots and so on) but we didn’t go that way for various reasons. What we are starting with is Greek, which I was leaning with anyway but it happened in a weird way. More on that in a minute. Though they are learning Greek, we do think it’s important that they learn a modern spoken language (yes, I know modern Greek exists) as well but what we will do there is undecided. Spanish because that’s obviously relevant in Texas? Chinese because it’s only going to grow in importance and they’ll be able to understand more of Firefly? German because Kathryn has experience and I want to learn it as well? Khmer because our church is involved in work in Cambodia? There are many choices. We’ll figure this out at some point. But for now, Greek it is.

Second, there are some aspects of my geeky heritage that I want to pass on. There’s a level of computer literacy you get by understanding just a little about programming, even if you don’t ever do that full-time, so I wanted to get them into that somehow. What about electronics? Can we use this to get a more applied look at Math? I never did well, partially because I did not think I would use it (wrong). I want to avoid this problem with them.

I’ve also wondered how I was going to be involved in this whole mix of things. Kathryn has certainly been the most important educator, and this will continue to be true, but I want to be involved as much as possible. Well, I’ve jumped in now and we’re having a lot of fun. At this point we’re like explorers with no map. What we are doing now is a lot of fun, what’s ahead looks rewarding, and we are charging that way full steam but we have no idea where we will actually end up.

The impetus of getting this started was a talk at the North Dallas .NET User Group by Cori Drew on geek parenting lessons. We (the organizers of the group) were sitting at the back listening and decided that we would try having a kid’s event at the same time as the normal presentation. We had our first kids meeting in June and have had them since. The instruction has been led by some of the very helpful people at MinecraftU. In the sessions we use a Minecraft mod called ComputerCraft and the kids learn how to program a bot in the game using the Lua scripting language. 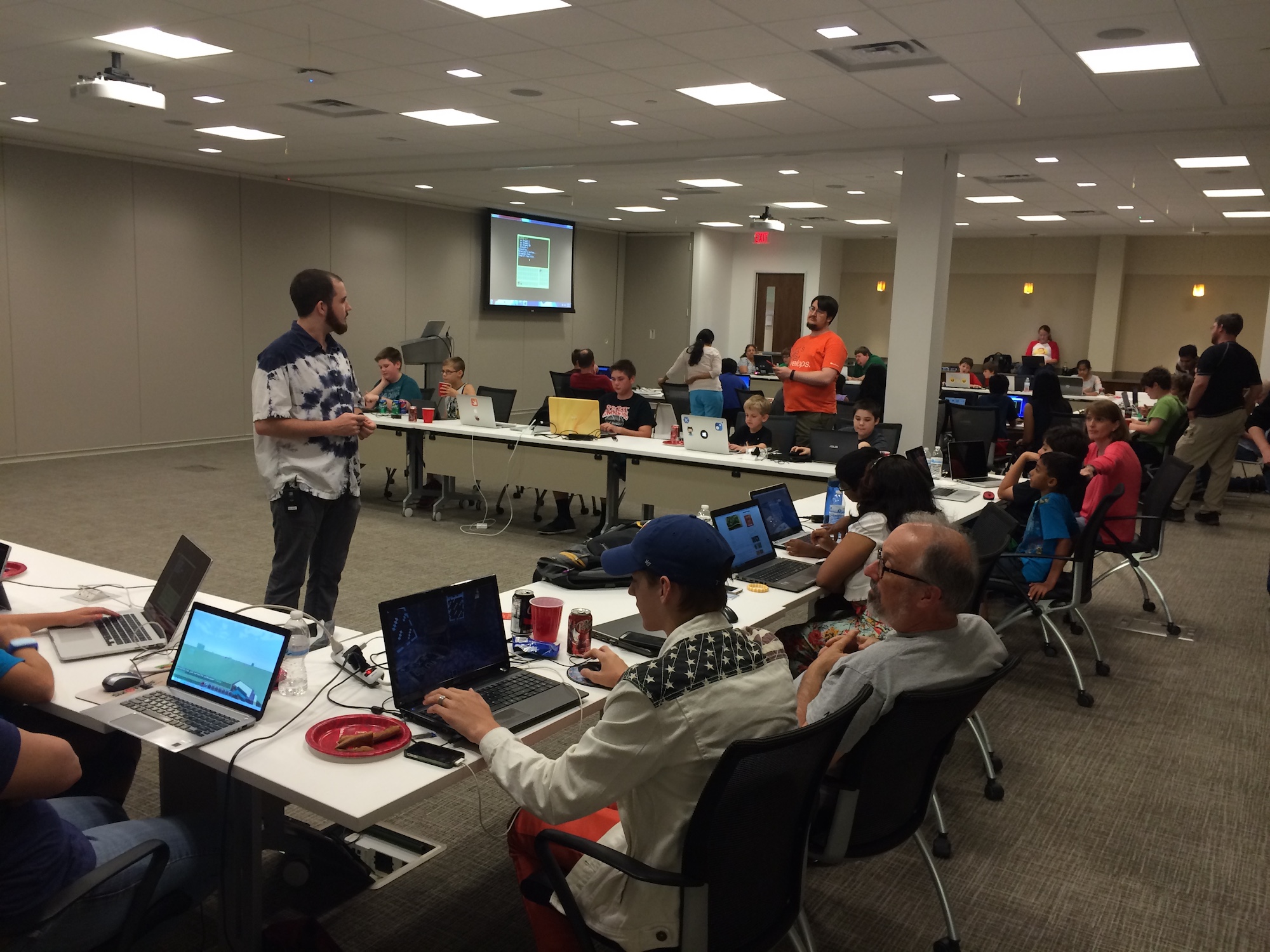 We’re going to do Minecraft for a few more sessions but will probably change soon to learn something else. What that will be is still being determined. If you live in the Dallas area and are interested in bringing your kid, sign up for the mailing list on the NDDNUG website.

I have been bringing four kiddos to the event, my daughter Abby (10 years old), son Jonathan (12), and a couple friends named Elliott (11) and Roy (14). As we were driving Roy and Elliott home on that first night, we were talking about how much fun everyone had and for some reason, either Roy or Elliott (I don’t remember which) mentioned that he wanted to learn Greek. They all echoed the same sentiment so after discussing it with Roy and Elliott’s parents, we decided to form a class. We would meet roughly every other week and would spend part of the time learning Greek and during the rest of the time do something related to programming.

This worked out perfectly for a couple reasons. First, this wasn’t something driven by me. I wasn’t trying to convince them that all this was a good idea. The motivation was coming from them, so that made it easier to start. Second, I got to leverage my kids excitement about taking a class with Roy and Elliott. So the class is a big hit thus far. Hopefully we can keep this going for a while!

For Greek we are using Athenaze. It took me about the first half of the first meeting to figure out that teaching this age of student is quite a bit different than teaching adults (yes, I am sure that is obvious to everyone). Since I have a lot of experience teaching adults and little teaching children, this is great experience for me. The book is good but I think I’ll be adding a lot of supplementary material and will be going down many side trails. It clearly isn’t meant for this age (I knew that going in) but it should work as a good resource.

The biggest surprise to me was that after the first meeting, most of them wanted to do more Greek and less Minecraft programming. That was quite a shock but I will go with it!

After watching my children type, I quickly decided to divert away from programming for a bit and just work on typing. Everyone got a copy of some Mavis Beacon teaches typing software and they are already much improved. This is also something that everyone enjoys.

Now that they are better at typing, we will soon start to switch more to programming. The sessions by MinecraftU at NDDNUG are great but when my kids don’t practice between sessions, they lose most of what they learn. The NDDNUG meetings keep them very excited and the kids certainly look forward to them but I think it will be our sessions at home that will really make them learn.

The next step starts today. I am taking the family to That Conference. Kathryn and our youngest will hang around town but Abby, Jonathan, and I will be attending the kid’s track at the conference the whole time. I’m looking forward to learning with the kids, to see what gets them excited, and also what I can learn about putting on events like this so I can bring it back to Dallas. We are all very excited.

So that’s what we’ve been doing. Just in case anyone is curious, I’ll check in as things progress.