﻿Setting Concrete Goals for Yourself in 2016

I decided that I would bang out a quick post to start off the New Year. I blame Sharon, who inspired me to do this. First, go read her recent post here (it’s short, so it won’t take long).

I think that Sharon is spot on about setting goals that you can do, things that you can actually accomplish. I like to think of this in terms of having goals with concrete, actionable steps to take to meet those goals. I put this into practice in several ways in 2015 and will continue to do this for 2016 because it really works well for me. This post is for you if you need some examples of how you can do this. Sharon’s post is a little short so I’m not sure she would agree with all of this but this is how I approach things.

When it came to caloric intake, I took two steps. First, I limited myself to one or just half of one Dr Pepper a day. I’m a big DP drinker, so that can add up to a lot of calories. Second (and slightly less concrete so not as good), I started eating small portions sometimes, especially during lunch. Let’s say I got a burger. Sometimes, I’d cut off a quarter and just eat the rest. Because the second step was a bit haphazard and inconsistent, it might not have subtracted much, so in terms of it being an actionable step towards a goal, it’s not a great example. But the DP restriction is and I’m sure that helped.

How about exercise? Towards the end of 2014 I got a FitBit. I took up the 10K steps a day challenge, which is more than I take naturally on most days. I kept that going for months. And then I started engaging in contests with friends, so I usually did more. But every day I had a goal of 10K. Very concrete.

As a result, I lost about thirty pounds over about five months. For the rest of the year I went into maintenance mode (though I definitely gained some over the holidays). Small changes over a long period of time led to good results. Now I’m getting myself out of maintenance mode because it’s time to lose more weight. This time the plan in the same because I know that it works.

Getting Better at Greek and Latin

First part of the plan, hire a tutor/reading partner and have a set meeting day every week. So I did that. We use Google Groups to video chat every Tuesday evening and having this set time gives me weekly checkpoints for reporting on my progress.

Second, I try to study both languages every day. I don’t succeed but having a way to remind myself helps (more on that below). “Study more” isn’t very concrete. “Study Latin and Greek 30 minutes a day each” is something that I can do. It’s concrete and actionable.

Am I progressing? Sure. Even though I don’t know if my concrete actions are the best actions all of the time for achieving my goals (I actually assume they are not), they are moving me forward. I am certain of that. And though I am constantly wondering how I can improve my acquisition, I never let that wondering get in the way of my daily routine.

Getting Better at iOS Programming

Finally, I also wanted to get better at iOS programming, but that’s a pretty vague goal. What concrete things could I do to improve my skills?

About three or four months ago I decided to switch up my schedule. Instead of getting up at 7:30-ish and going to bed at midnight-ish, I switched to getting up at 5:00 and going to bed most nights at 9:30-ish. Then starting around 5:30-ish, I would work on the app I wanted to build until 7:30-ish. I did this every day, almost without fail, until the Christmas holidays. The result? Well, it’s hard to measure “better at iOS programming” but I’m quite comfortable with UIKit now and am spending more time thinking about what I’m trying to build than getting UIKit to bend to my will. Sure, there’s a lot left to learn (there always is), but I’m productive and happy.

So I’m not trying to concretely measure my knowledge. That would be difficult. So how was this concrete? I have an app I am building and I have set times every day to work on it. The routine keeps it concrete and actionable.

One thing that I do to help me in my daily tasks is to use Evernote to keep a daily to-do list. Yes, I know, some people don’t like them but I do. They help me a lot. 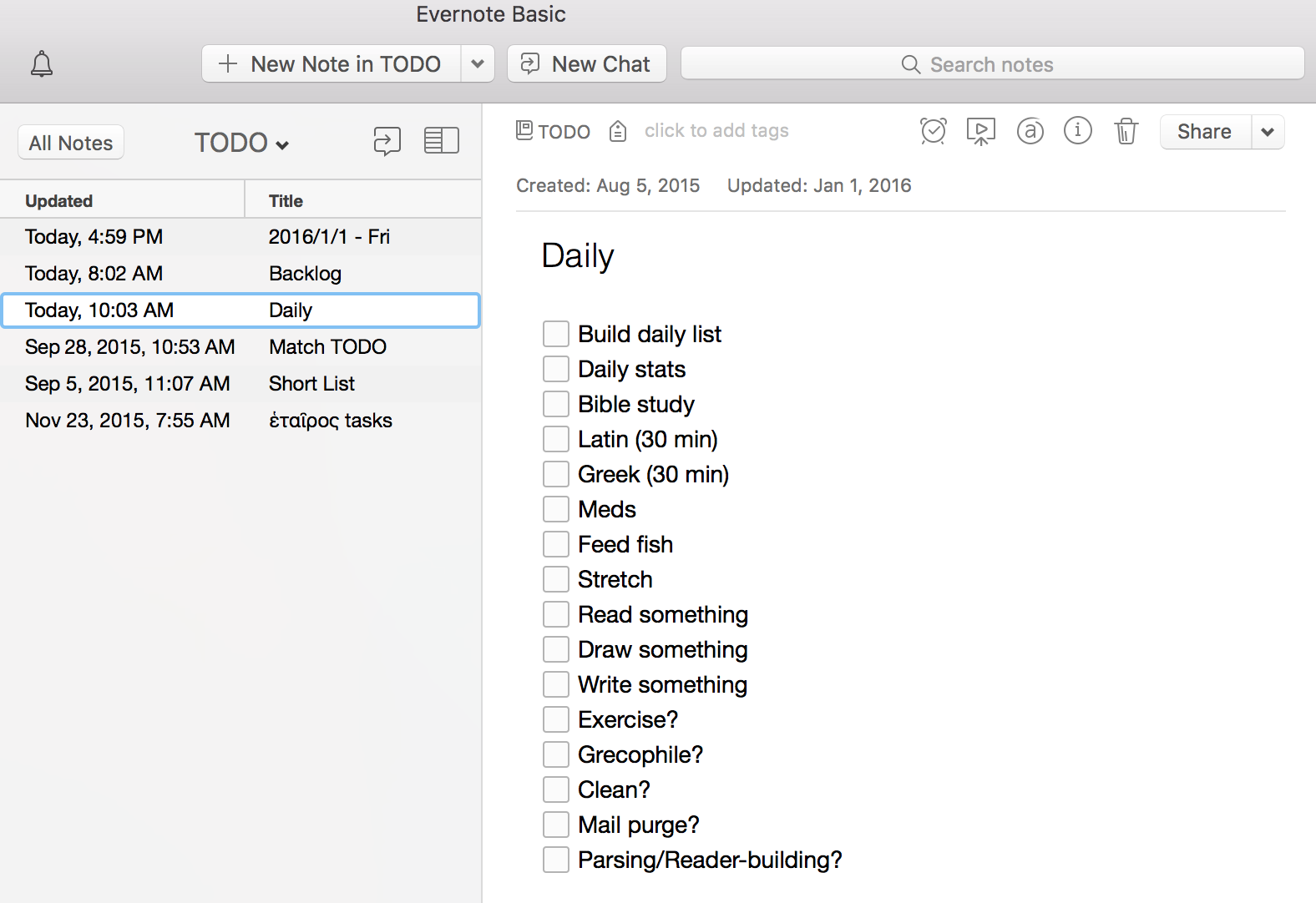 I don’t put everything that I do on here. I have no checklist for eating, playing with the kids, hanging with the wife, etc. This is just the me list. You could put everything on a list but I would feel weird putting things like “have sex”, or “poop” on my to-do list. But to each his own.

Every morning, right after I wake up and shower, I copy that list into a new dated note for my list that day. Then I work through the list, doing one of the following for each thing on it: 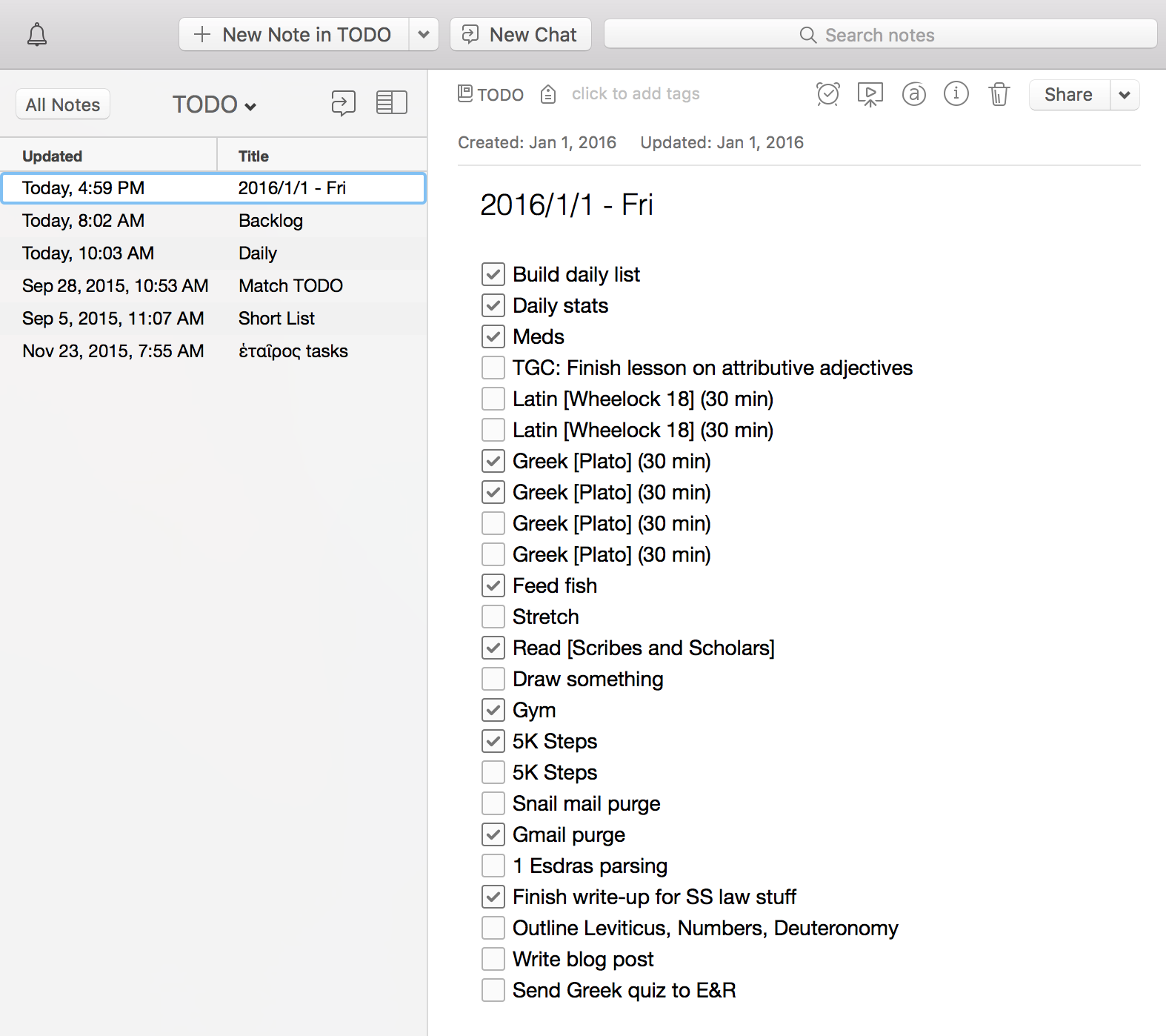 This list is kinda big. Today is a vacation day, so the list is a bit bigger than workdays. But it’s okay anyway, because I know it’s important not to stress out about my list. But more on that below.

Of course some days I don’t feel like making a list. That’s fine because sometimes I just want a day where I do whatever strikes my fancy. But on the next day I start the day off with the list. The list is my perpetual, in-my-face reminder of what I think I should be doing to make me a better person every day. That doesn’t mean that I have to do everything on the list every day. It just means that I need to do everything on the list sometimes every few days, or revisit if it should be on the list at all. And that’s how I get better.

A bonus of this approach is that I now have a log of what I’ve been working on/studying going back for months. Maybe that will be useful at some point.

I would like to end with some attitudes/practices/principles that I’ve adopted to make all this work for me.

Second, favor smaller units of work. If you get pleasure out of checking off something from the list, this is especially useful. As you can see from today’s list, I wanted to do a full two hours of Plato reading. Instead of having a two hour item, I broke it down into four thirty-minute segments. Also for walking, I don’t usually put 10K steps. Instead, I break it up into 5K items. Sure, I’m just playing mind games with myself. But it works.

Third, when you have time-based tasks like “spend 30 minutes on Greek”, at some point you have to make that concrete and do something in particular. Having the routine in place in many ways forces you to come up with concrete things to do, so the routine is a useful tool.

Fourth, slow but steady progress is okay. I don’t need to lose a lot of weight today. Doing it over some months is fine. And it’s not sustainable for me to cut out all Dr Pepper and potatoes from my diet to lose weight anyway. I just need to cut down. Or changing topics, I don’t need to understand all of Plato’s Greek today. I couldn’t anyway and learning it over time is fine. Come up with a plan with concrete daily/weekly steps that you can do that would be sustainable for you.

Fifth, you don’t have to get everything done every day. Don’t feel bad if you don’t get your list done. I rarely get everything done. If they are daily routine tasks, I just delete them at the end of the day and try to make sure I do those the next day. If they aren’t daily routine tasks, I just copy them to the next day. This is okay. Once you create a list, you don’t have to do it every day.

Sixth, don’t let dorking around with your learning system/methods be a substitute for time spent doing. I have spent a great deal of time writing out flash cards or writing little applications for helping me study. Sometimes they help but sometimes they end up being distractions from doing the actual work. I think it’s normal for obsessive self-improvers to do this kind of thing. If this happens to you, recognize the problem and find concrete things you can do to improve now, not next week. Have dedicated time to work on improving these things. Just don’t let this be a substitute.

So that’s what I do. I imagine that many will find the list very annoying but it works for me and maybe it will work for you. Do you have a different way of approaching this? If so, I’d love to hear about it in the comments.