Last week was a big deal for me. I have been doing some iOS development off and on for the last year but last week I actually released my first solo app. It is called Read Some Greek and here’s the dedicated site I have for it. 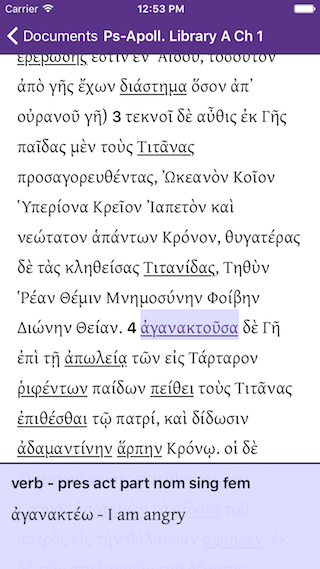 The app is written in Swift and targets iOS 9 only. Everything except the text view itself is straightforward. The text of the reader (see screenshot above) is made using a UITextView and what feels like way too much NSMutableAttributedString manipulation. Soon I will be writing a post giving the technical breakdown of each of the views, just in case anyone is curious.

The data for the app is currently embedded in the app when it ships, but during editing lives outside the app in a separate repo. The texts and parsing data is actually shared on Github here if you are interested. The files embedded in the app when it ships are kept in sync with the master repo via shell and Python scripts. When collecting data, I am almost always in Atom and am editing text files. So far the flow works for me.

What Am I Doing Now?

Is is, of course, a work in progress. I will post here, tweet, and send out emails (list signup here) as updates are made. The next release probably won’t include any major new features. As far as technical progress is concerned, I am working on a web version so anyone can use the reader and not just iOS users.

As far as content is concerned, at the moment I am preparing one more section of Pseudo-Apollodorus and an Elephantine papyrus published in 1912 by George Milligan. When those are done, I will publish again so everyone has that.