There is a long tradition of monologue-style instruction in the church. This is more or less true of various denominations For all my life I have attended baptist-esque churches, which are known for their focus on the sermon, the epitome of monologue. In High School I also started listening to sermons on tape (primarily by John MacArthur as my church had a good collection) and this continued into my college years (though I branched out). And on the topic of my college years, the monologue was the norm in both my BA degree in religious studies in college and my master’s degree in seminary. Even now I pay a lot of money to The Great Courses to get high-quality monologues (and they really do have a lot of great stuff, by the way).

I am an heir to this tradition; therefore, my default mode has been the monologue. But I am consciously changing that. The monologue is a good way to deliver some things but it’s certainly not the right way to deliver everything. Looking back, it is clear to me that my experience at The Iron Yard changed me. Though I didn’t teach the Bible there, the limitations of monologue in that context made me re-evaluate its usage generally (unsurprisingly, this is related to similar thoughts on having less monologue in technical users groups in "Upcoming Changes to NDDNUG", "From Listening to Active Learning and Mentoring", "Curricula, Mentors, and Group Learning", and "More Options for Learning"). And though monologue is a teaching tool that I use, it’s now just one of several.

In an effort to help others (perhaps you) think outside the monologue, I’m going to start blogging some of my experiments in more active learning in Bible studies. I am going to start with the activity I led today in our Sunday morning study.

The goal in today’s lesson was to cover the tiny book of Jude. It is a short book and I could have monologued and surveyed the thing in a few minutes. But that is not what we did.

If you know your Bible well, there is a good chance you know that there is some overlap between 2 Peter 2:1-3:7 and Jude. If you know it really well or if you read useful books that will point out this kind of thing (like commentaries), you will know that there is enough overlap to argue for some level of literary dependence between the two. Knowing this, I put together this activity:

By the end of the activity, my pages looked like this. The entire activity took about 45 minutes 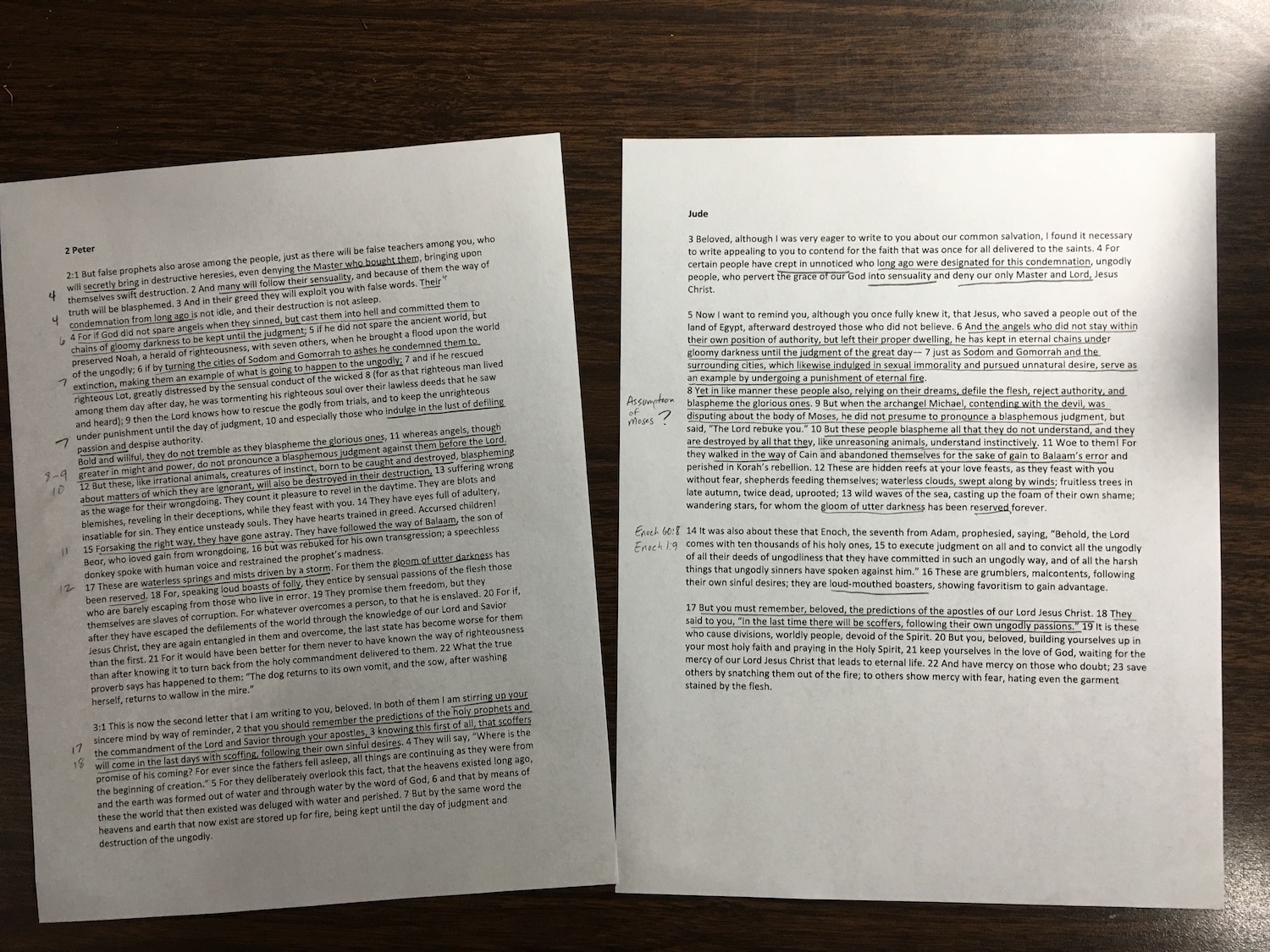 Here are some things that are probably worth discussing.

I didn’t pick this approach because the issue itself is important. I picked this because it was a way to actively engage them in the study of the text.