Today we headed out around 9:00 to Athens. We had a meeting at 10:30 (ish...anyway) with Agamemnon at the National Bank Cultural Foundation Center for History and Paleography... 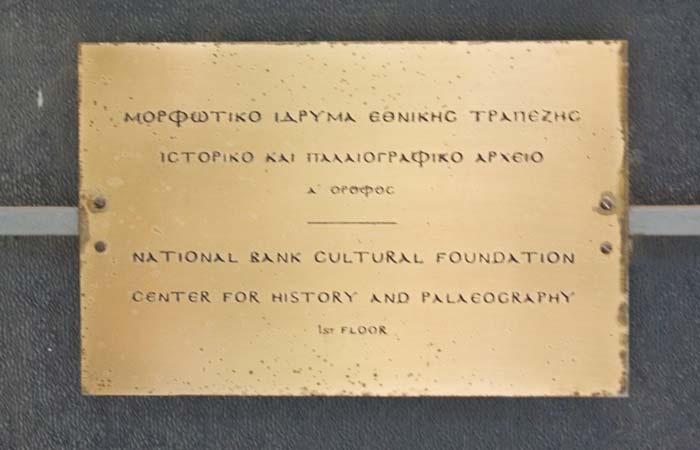 Today we headed out around 9:00 to Athens. We had a meeting at 10:30 (ish...anyway) with Agamemnon at the National Bank Cultural Foundation Center for History and Paleography. We got to the area early, which is good, because finding it was not an easy task. We had an address, which was better than nothing, but it still took us at least 30 minutes of wandering around in the area to find it, silly Americans that we are. And, btw, the local police who were loitering around the area chatting and snacking on something that looked like a pretzel were of no help. Of course it didn’t help that they didn’t know English, and our knowledge of modern Greek is...not quite fluent. We will leave it at that. But we did find it. We might not have even been late. 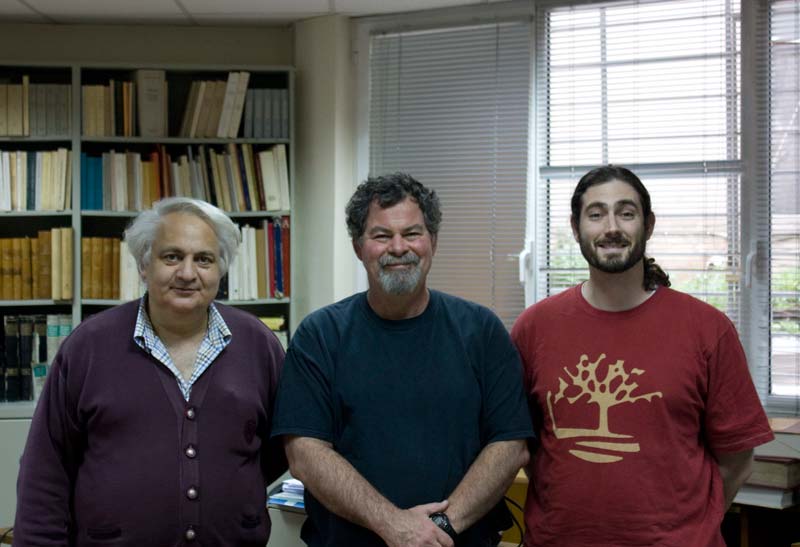 So we met with an incredibly pleasant fellow, Agamemnon Tselikas, director for the Center for History and Palaeography of the National Bank Cultural Foundation. On the right he is pictured with two members of the exhibition, Dan and Adam (in order, left to right). Agamemnon took out a significant chunk of his day to talk to us. I think we met till after 1:00, and he was as useful and interesting as he was pleasant. The center is not one focused on textual criticism but on paleography, though we obviously share many of the same interests! They have a multi-year program where I think they study Greek paleography primarily, though I am pretty sure they branch out given some of the facsimiles they had. Given the number of chairs in the lecture room, he apparently has a larger number of students.

Topics ranged from their work to ours, to the multi-spectral imaging of manuscripts, to the nature of the collections in Greece and on. He is clearly well-connected and very knowledgeable of the materials in Greece. His storage setup was very interesting. His manuscripts, old books, many microfilms and server storage for his digital images, were all in a small but well laid out, temperature-controlled room. Seeing a server rack with what looked like several RAID arrays of disks next to shelves containing his manuscripts, microfilms and other relics made for an interesting contrast: high-tech next to antique.

If you are interested in studying paleography, the center looks like a great place to study, especially if you want to do that study in Greece. 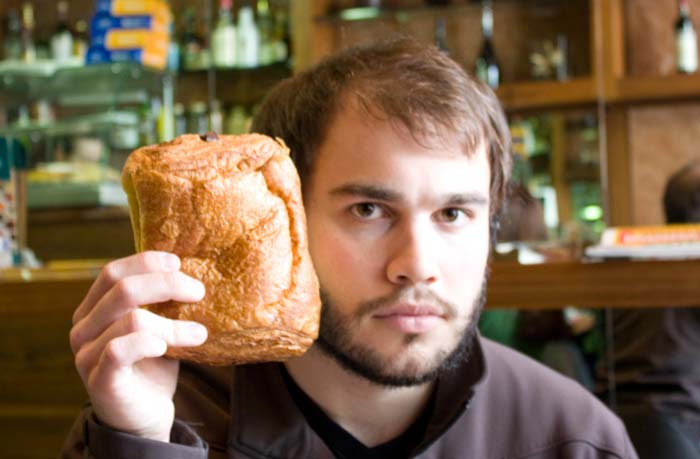 Parking in Athens is a nightmare. Seriously. Some enterprising capitalist needs to come in, buy a plot of land, build a multi-level parking lot and start raking in the dough. The reason why Garrett (pictured to the right with a very large chocolate-filled croissant) was not in the picture above was he had to leave early to go get the car, which he had to park pretty far away. It took him so long to find the parking spot he was about an hour late for the meeting. Seriously. Parking is horrible. Somebody please fix this.

From the area of the paleography and history center you get a nice view of the Acropolis. Because we’ve actually been working we haven’t had a chance to see it up close yet. This is the closest so far. Eventually, we will get there!

You may not know this, but the Orthodox celebrate Easter later than we in the West celebrate it. Easter was last Sunday for us, this next for them. This has actually been rather irksome. Several people we were going to meet with/places we wanted to go have been unavailable to us because of it, and we haven’t even got to Good Friday yet! Still, we have gotten a lot done and had a very successful day today. Spirits are high, though we are still waiting on our first definite confirmation of a manuscript shoot for my leg of the trip.

I am typing this at the end of day 4. It is very early in the morning as I made the mistake of taking a nap later in the evening. Now time to hit the sack so I can get some sleep. Finally getting drowsy...the exciting (at least for me) events of day 4 come on the morrow.

Really enjoying the blog. Very interesting. I printed them out for mama this evening when she was over here.

Hope you continue to enjoy yourself...
Looking forward to more

and looking forward to spending the weekend w/ your beautiful family.

"Some enterprising capitalist needs to come in, buy a plot of land, build a multi-level parking lot and start raking in the dough... Parking is horrible. Somebody please fix this."


It is a typical response to living in a country for the first time is that you see all sorts of things that ought to be changed. But the reason that countries are stuck in a certain level of development is precisely because people don’t just "fix" things. Its a lot easier to go out and protest about something. Particularly in a country which is only semi-capitalist at best.

Maybe they’ll look outside their borders and get some ideas. It would definitely help!