Day 7 was indeed a day of epic proportions. It was our first day off, so the roomie (Garrett) and I jumped in our little car and went on a road trip to Cape Sounion, a place I have wanted to go ever since I saw Buist Fanning’s pictures of it several years ago (thanks!).

Since it was our day off, we slept in. We had been planning to go hiking but the roomie was wanting to do something else, so we sat around and discussed what we wanted to do for the day. We looked up various cities in the area on the web and in his travel book and couldn’t find anything near that seemed completely awesome until I noticed that Cape Sounion was just a little ways south. After a little discussion we headed out.

A Hiking Distraction (and Surprise)

But hiking was still on our minds. Along the way we saw numerous little mountains (Greece is covered by them) but one in particular caught our eye. We found out later that this particular pick was an incredibly fortunate one, but I will unfold this to you as it unfolded to us. Below is a picture of our mountain, taken at around 100km an hour from the car (the fuzzy green at the bottom is the top of some trees we were zooming past):

There was a street nearby heading towards it, so we veered off to the left, parked, and headed out. On the right you see Garrett with his "I am ready to climb a mountain" look. And if you look just above his right shoulder you will see the back side of a sign that we should have looked at, as it would have told us a great deal about what we were climbing. But we were too busy looking at the mountain to see the signs. 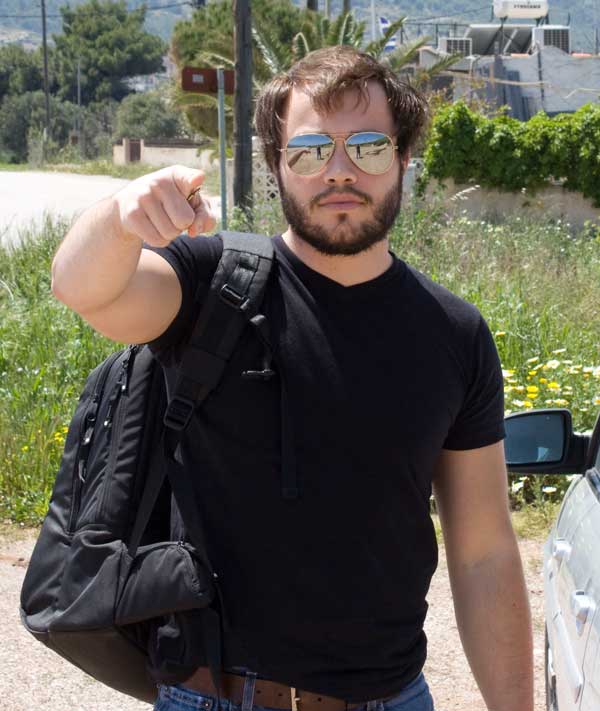 So we began our climb. It was quite tiring, but that is mostly because I am out of shape. The hike was not very long nor was the climb too steep, but we made it up with only a few rests. The view from the top was fantastic, though it was somewhat marred by the factory that was behind the mountain. I will spare you pictures of that. Here are a few pictures from the top:

Proof that I was there: 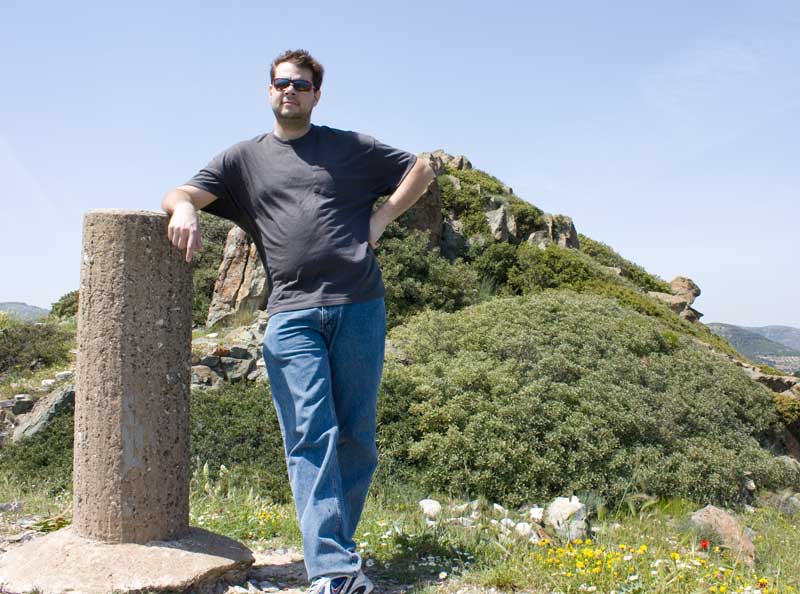 View of the nearby city:

View of the nearby bay:

Once we got to the top we saw something else that was interesting. We just HAD to check it out on our way back down. So we made our way down the other side this started circling back. Here is what we saw from up top:

Looking down one side we saw some kind of cave or mine...had to check that out: 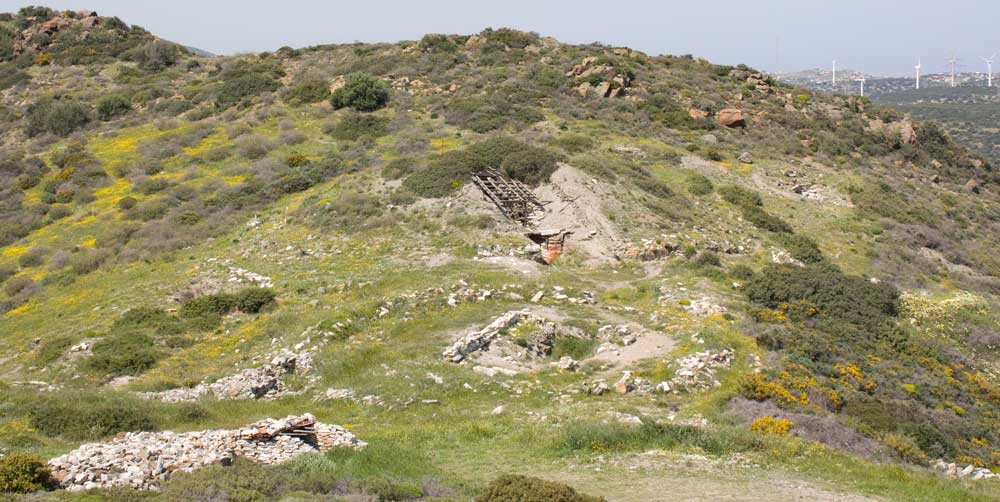 Look down another side and you see ruins of some sort. 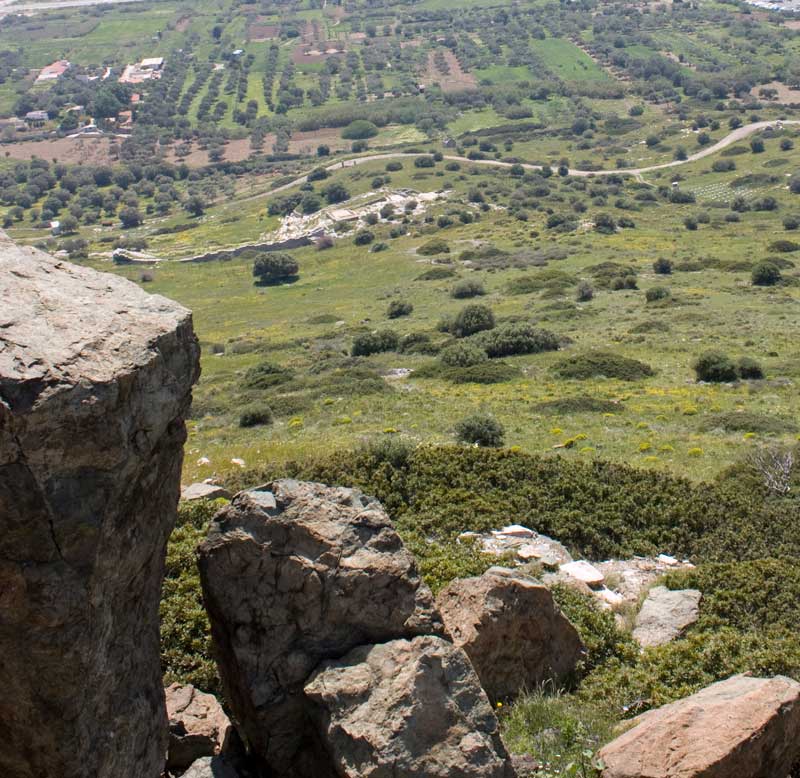 The first stop was the cave, because it was closest and we could hit the other on the way back to the car. The climb down was a short one. If the cave was very deep we would perhaps have had an issue, though Garrett mentioned using his iPhone as a flashlight. As it turns out, though, the cave wasn’t hardly a cave. We are still not sure what it was used for. 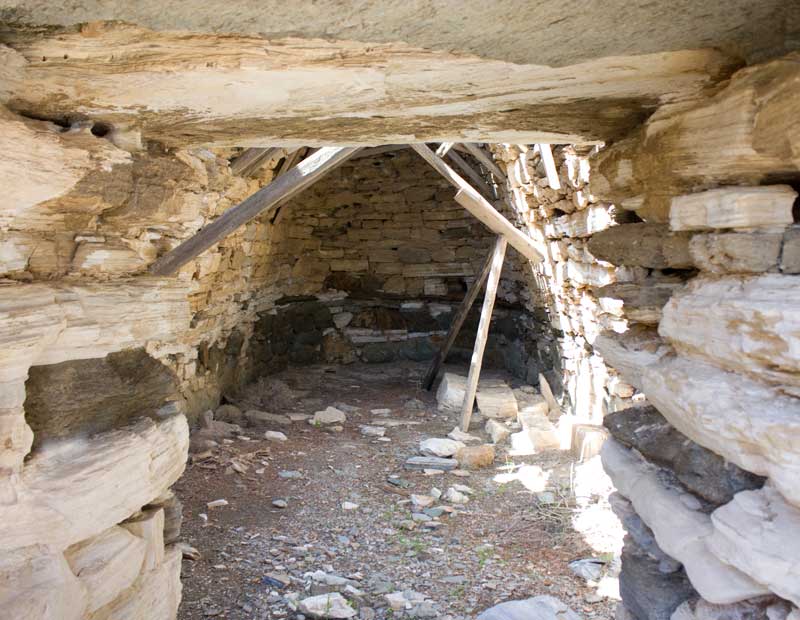 From the back of the structure, looking at the entrance: 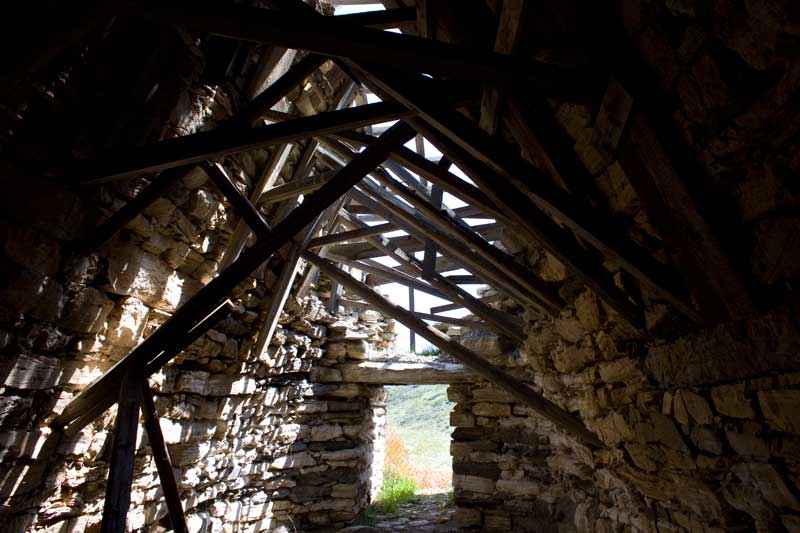 As you can see, the roof is being held up by some wood supports (fine craftsmanship as you can see...I felt very safe), so there would be reason to think that the structure was not that old. But there were signatures of individuals going back to the early 1800’s on the walls and the wood was definitely not that old, so clearly it was a later addition. We spent just a little time there as we did not (and still do not) know what it was (no sign outside) and then moved on to the ruin-like structures we saw from the top. As it turns out, there were several. 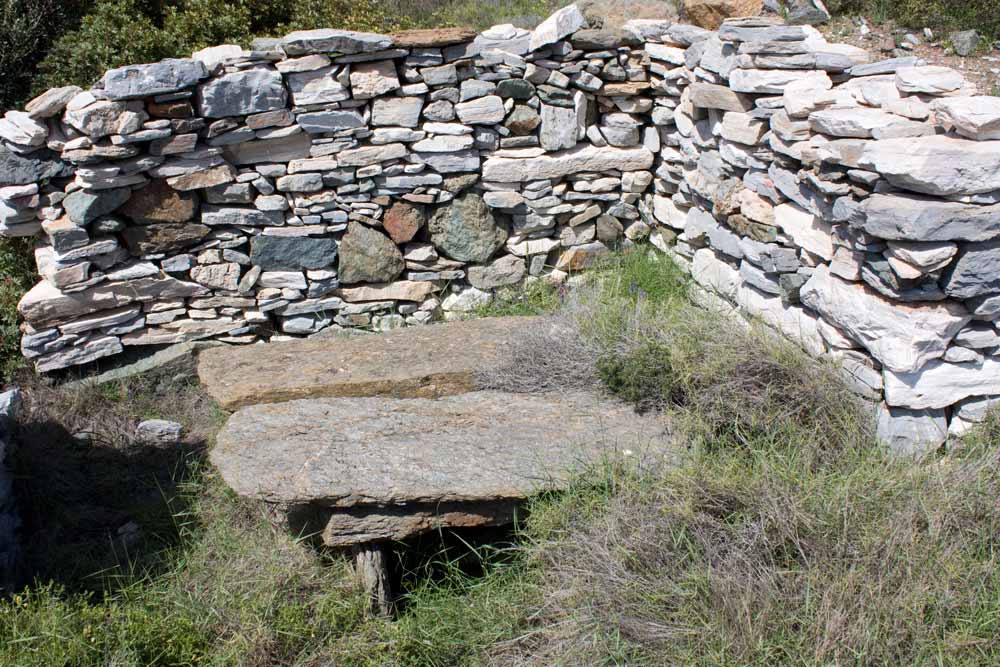 The first was an interesting looking structure. The wall around it looks much later than the thing itself (not that I am an expert on such things). We are unsure what it is, but it looked like it could be a primitive altar of some sort. It doesn’t look like it would work well as a chair or table. Regardless, it looked very old, and was really making us wonder if we had stumbled onto several bits that were really old.

Next we ran into what would be best described as a little grouping of houses. It had a road, a number of buildings beside it and a few wells. Here are a few pictures: 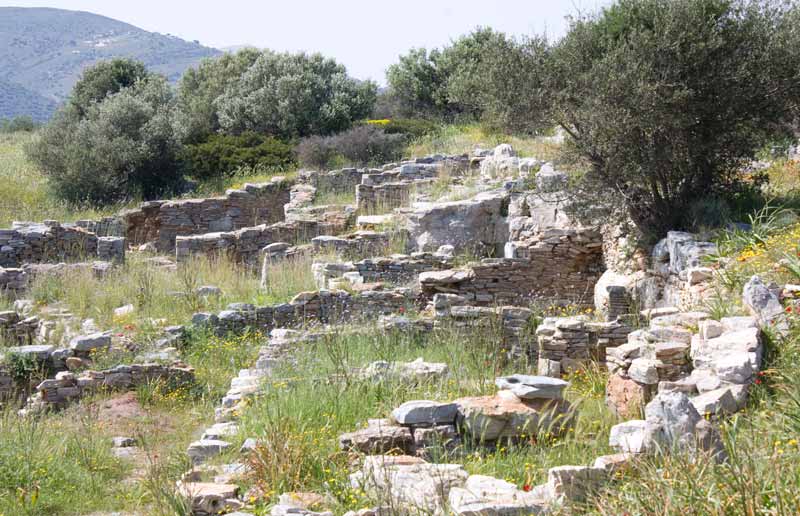 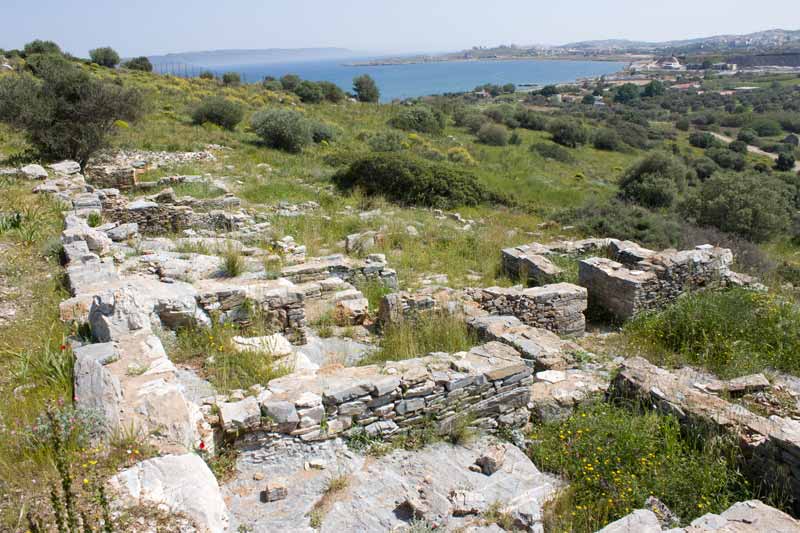 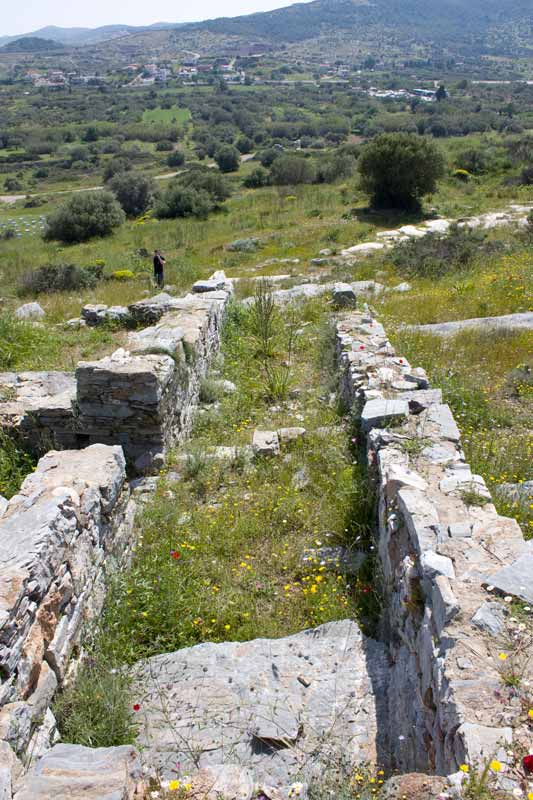 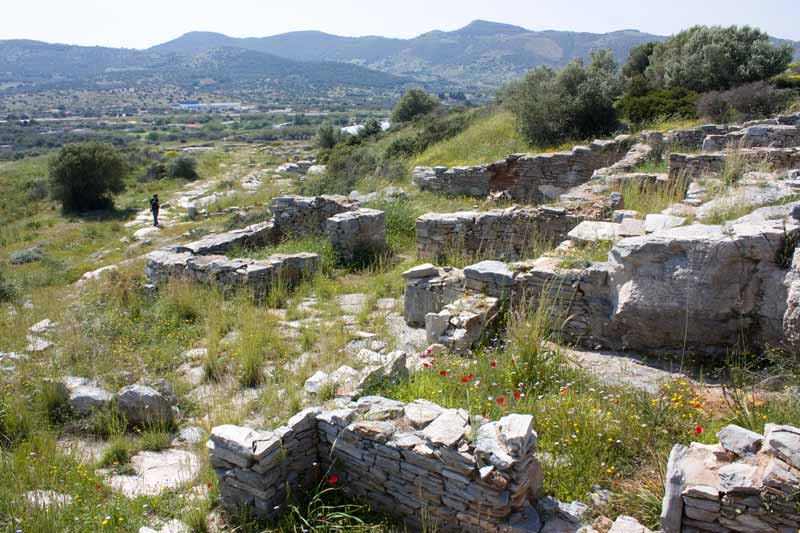 This is a pretty good view of what appears to be a path or road through the structures. Not smooth enough to drive a car on, but good for walking. 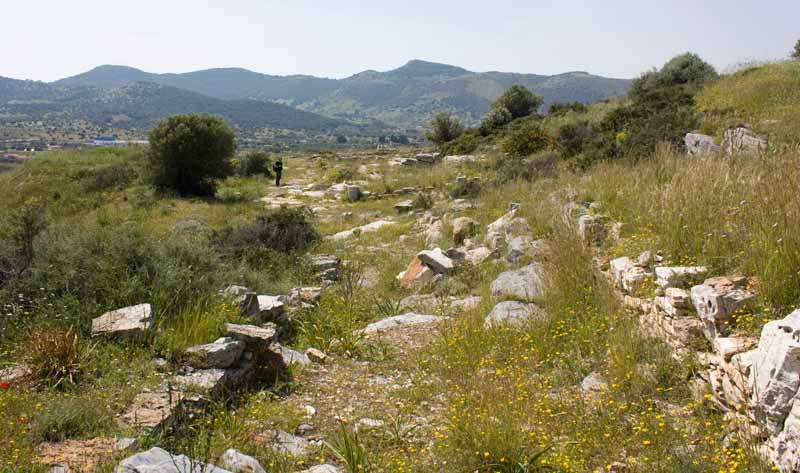 If there was anything built here that did not belong, it is this. The smooth concrete, the fact that it is in better shape and that a metal pole is sticking out of it all point to a later date to me, but someone else may know better. 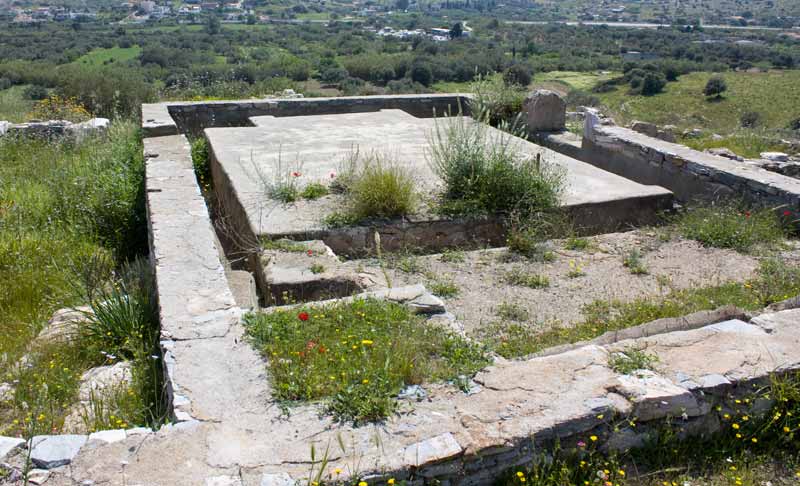 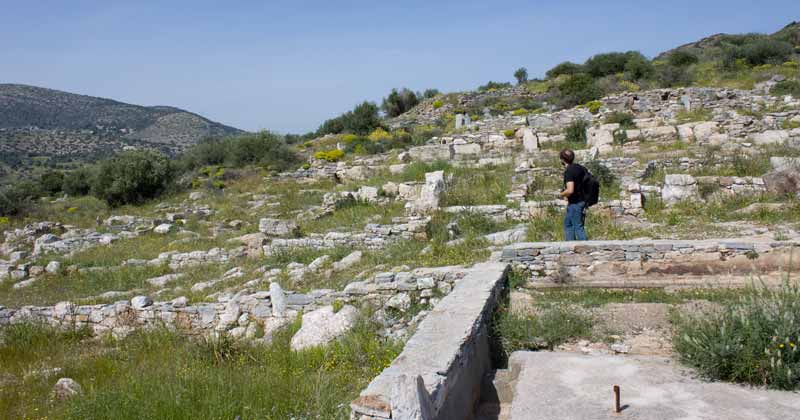 We both thought this was a well. 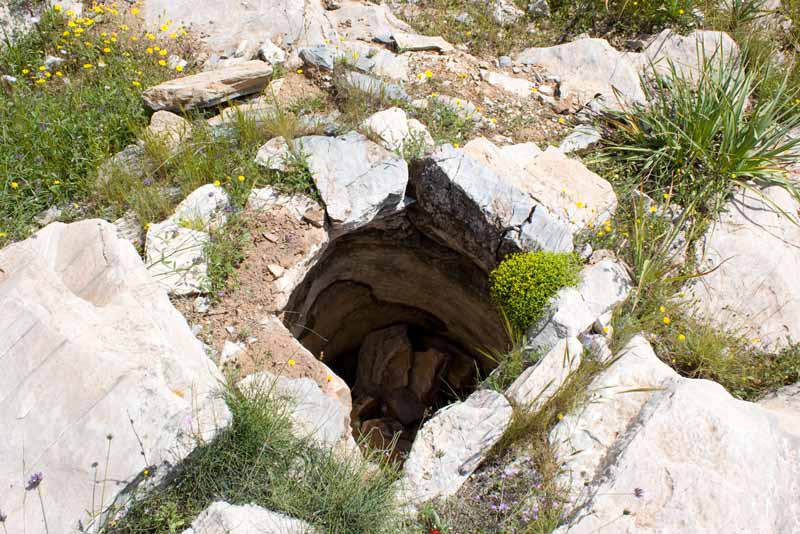 One of the rooms of the complex had this shelf built into it. We did not see anything like it in any other rooms. 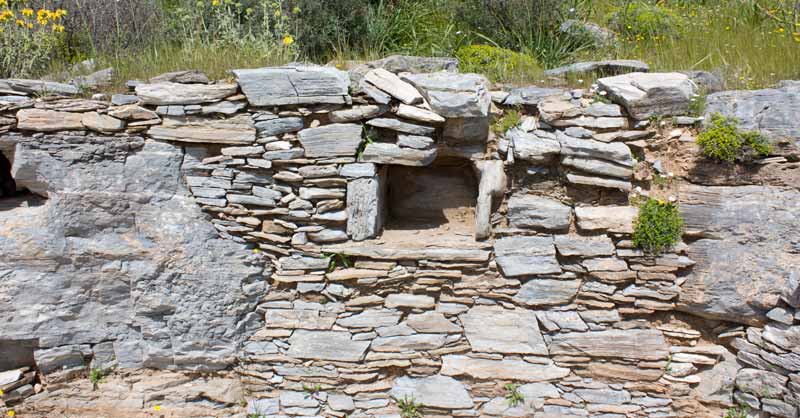 And right below that shelf was this bowl that was carved into the rock. Not sure what that is for either. 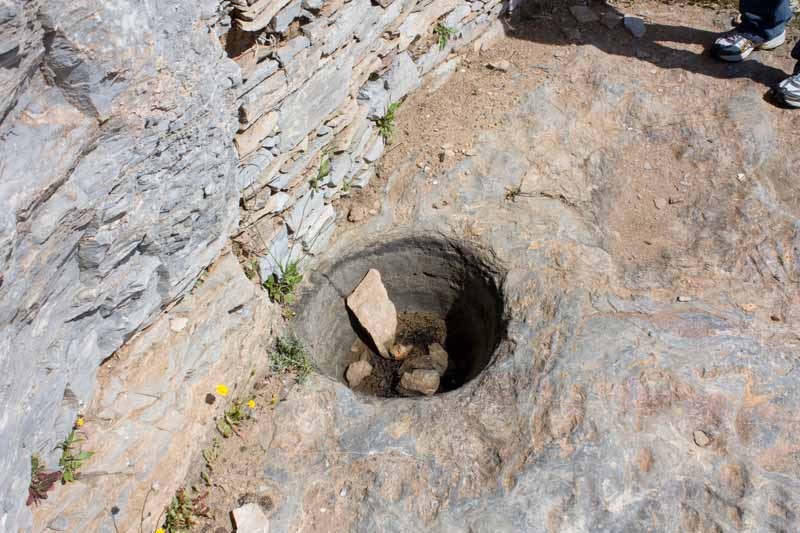 So after spending a while in those ruins, we continued on. Below was a road that led in the direction of our car, so we hit that and headed on our way. What we saw next was a huge surprise for us, and made us realize that what we had just been looking at is probably older than we were thinking. 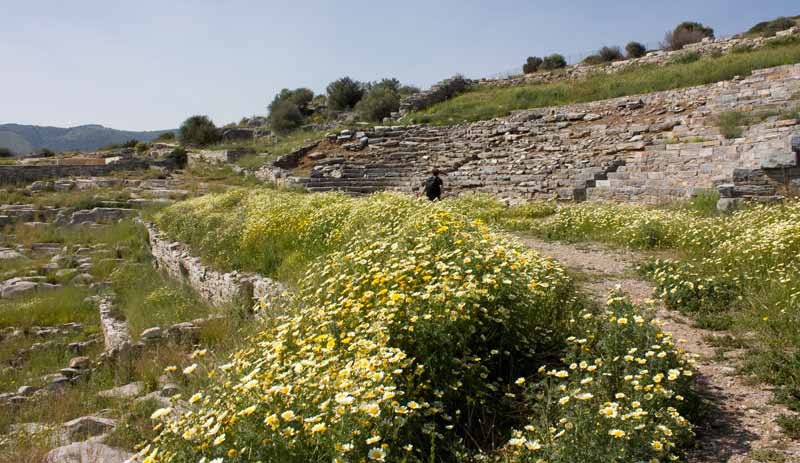 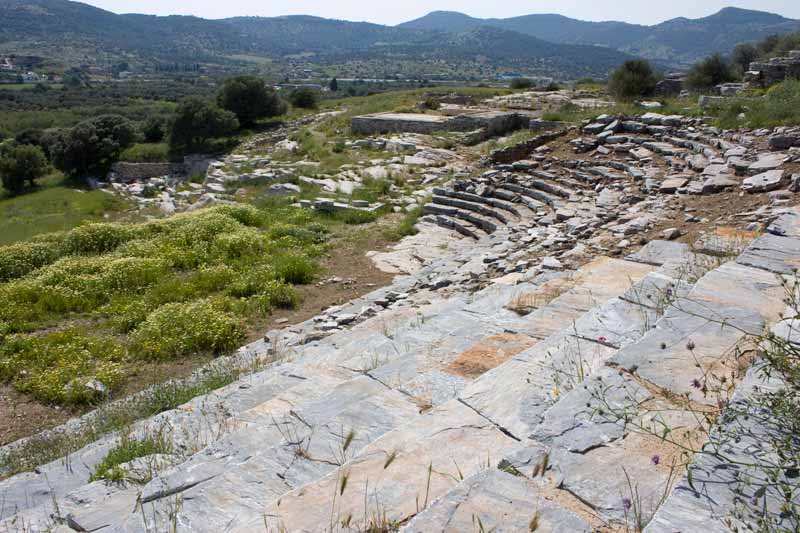 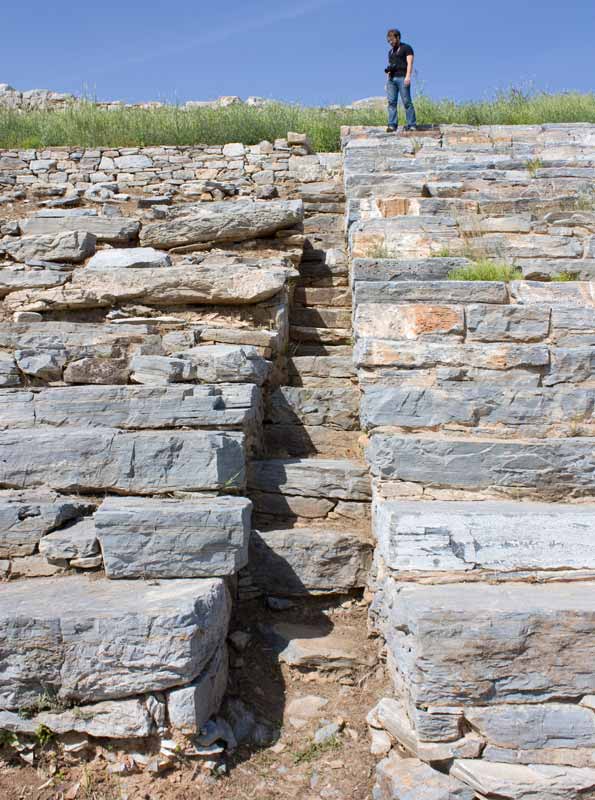 We met a nice couple there who informed us that the amphitheatre we were looking at were in fact around 2500 years old. How that date applies to what was above on the mountain is still unclear, but the character of the various bits are similar, so my guess is that they all come from that general timeframe. We found this to be very surprising and were very pleased! After hanging out in the amphitheatre (I recited a bit of Middle English from the Canterbury Tales that I had to memorize in High School), we headed back to the car. On the way, right just a few feet from the car (the sign pointed out above) was the following:

The mystery is solved! We were at ancient Thorikos. If anyone else is interested, we have a lot more pictures and in higher resolution. Just shoot me an email or something.

Back on the Road to Sounion!

So we got back on the road and headed to Sounion. The drive was not very far (we were probably in the car not much more than an hour).

If you are not familiar with Cape Sounion, on its peak is a temple to Poseidon. It is the first place mentioned in Pausanias’ Description of Greece (though Pausanias apparently gets a little mixed up as he confuses this temple with one to another god nearby). It is a beautiful site, and the following are a few pics:

We spent several hours there. This pic was taken early on:

Our view for dinner. Not bad! 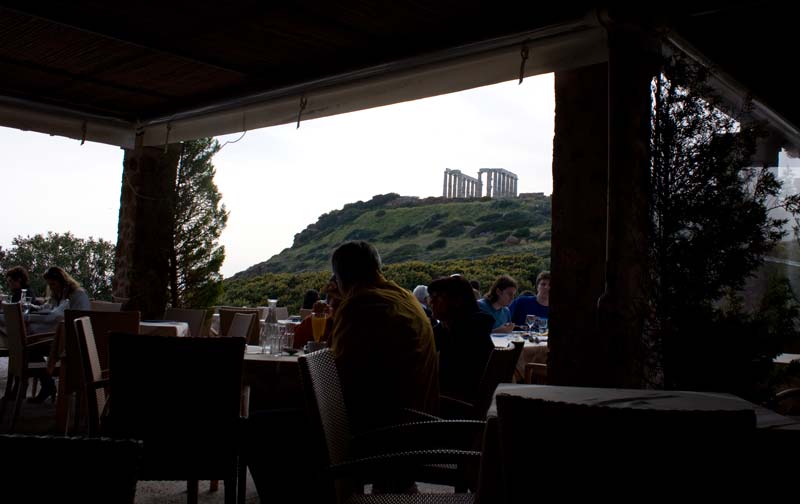 The clouds and sun made for some interesting pictures. 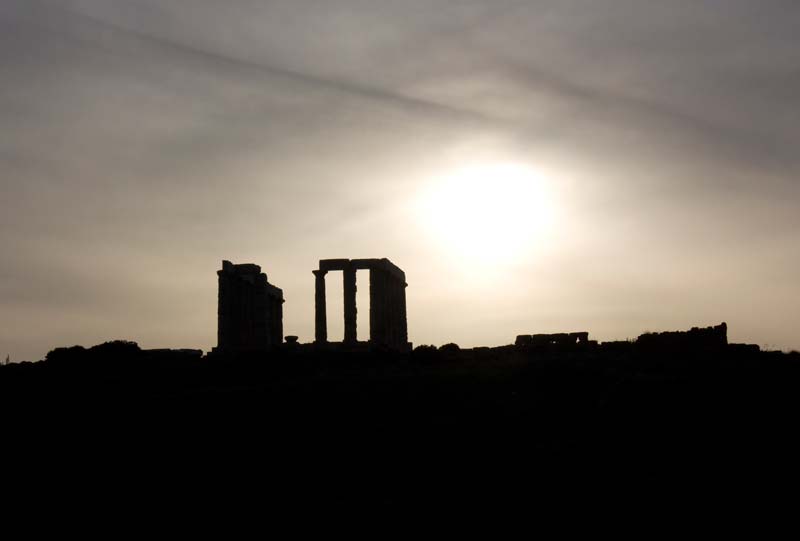 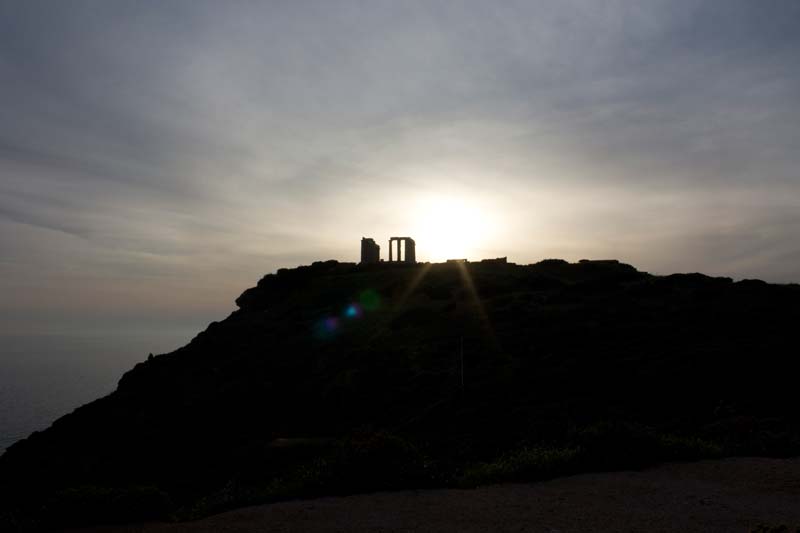 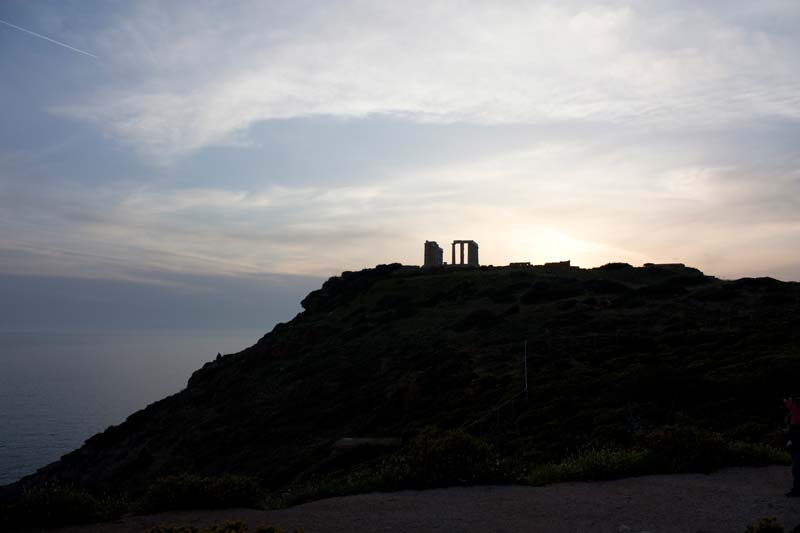 Unfortunately, we were not able to get closer. They closed early (at 3:00) because of Easter. I am hoping we can make it back up there sometime this trip. Here’s to hoping!

We leave our story of the road trip to Sounion with this final picture, taken from the opposite direction of the others as we drove away: