The day began earlier than the last several since we are on a schedule today. I woke at 7:00 and we left around 8:15 to head to the institution at which we will be photographing for the next three days. We got there without a hitch. 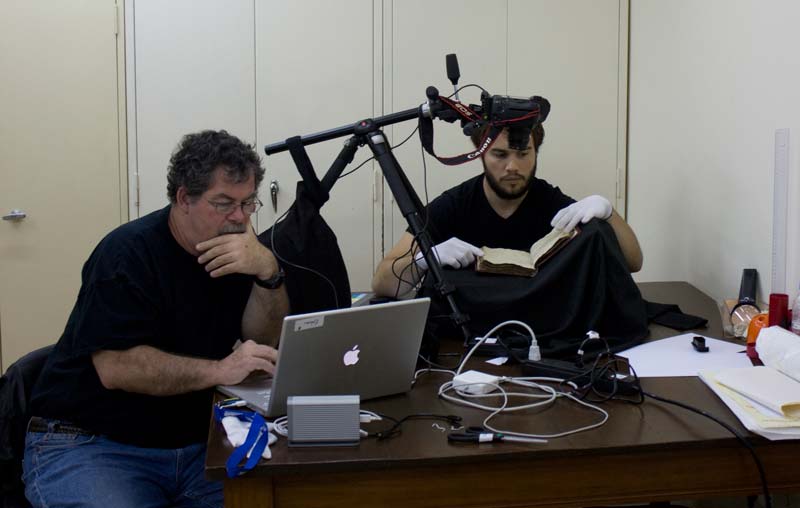 We were given a nice big table for setup. It took us a bit to get started as we had to get the gear in place. You can see a picture of the setup on the right. If I remember the timing of this shot right, they were photographing a newly discovered manuscript of Revelation that we found this morning while perusing the catalog. You may not know this, but the book of Revelation was apparently copied the least of all the books of the New Testament, being extant in only about 300 copies. That’s about a tenth as often as the gospels were copied. Even though it appear to be a late copy, any copy is good to have.

Just in case you are wondering, these are the primary materials to have on-hand when doing a shoot (and you’ll see most of them in the picture above):

The actual photography is fairly straightforward for easy manuscripts (which as the case for the ones shot today). Make sure the entire leaf is visible, the text is straight and the image isn’t out of focus. Images are taken of every leaf as well as all the pages that constitute the front and back covers, including the spine. For manuscripts that comprise the entire book, that means photograph everything. For those that do not (which is not uncommon for Revelation as it is often mixed up in books that contain a number of books not generally considered in the Christian canon...a significant point), only the pages of the actual manuscript are photographed with the cover material. Other works are not photographed due to time constraints (bummer!).

To photograph a manuscript well and at a good pace, it takes two people. One is responsible for getting the manuscript mostly squared up under the camera. The second has a better view of the screen and calls for further refinements and manages the picture taking. Garrett did all of the handling today. I did the computer work for half of the first manuscript and all of the second. As I was doing that, Dan was checking the prep docs prepared for each manuscript (they detail information about it and what leaves to shoot) and looking through the catalog for any previously unknown manuscripts (good thing he did). When finished, Dan did the rest of the computer work.

And that was our work today. We shot less images than we wanted, but setup took up some necessary time at the beginning. The institution graciously allowed us to leave the setup as-is so we can start on it immediately when we get back in the morning.

And so that is it for the day that would likely be of interest to you, dear reader. Be ready for tomorrow’s exciting post :)